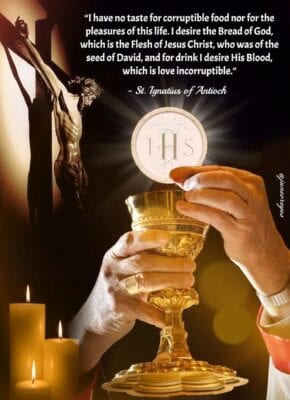 “The dismissal of Mass marks the beginning of our mission.”

Have you ever wondered why we call what we do on Sunday “Mass”? We aren’t referring to a large amount of something nor to a scientific measure. It doesn’t matter how massive the crowd is, either.

We get the word “Mass” from the very end of the liturgy, when the priest of deacon dismisses us.  He concludes after the blessing by telling us to go:

“Go forth, the Mass is ended,” “Go in peace, glorifying the Lord by your life,” or simply “Go in peace.”

For centuries, the Mass concluded with the Latin command: Ite, missa est. The word missa is where we get the word Mass. (This is one reason it is proper to refer to the worship of our Eastern Catholic brothers and sisters as “Divine Liturgy” rather than the Western term “Mass.” Latin has never been the language of their liturgy.)

In his apostolic exhortation Sacramentum caritatis, Pope Benedict pointed out that missa simply meant dismissal in antiquity. Essentially, the priest would just be saying, “Go, it’s the dismissal.”  But over the centuries, the meaning here has become richer.

Some suggest understanding it with the notion of sending: “Go, you have been sent.” Pope Benedict agrees with this when he says, “The word “dismissal” has come to imply a ‘mission.’ These few words succinctly express the missionary nature of the Church” (Benedict XVI, Sacramentum Caritatis, 51).

The dismissal of Mass marks the beginning of our mission. It’s not that the liturgy is over. It is that our work has begun. We must take the fruits of that liturgy, what we have received, and take it out in to the streets, into our families, our homes, our workplaces, and our communities.

It can be tempting to be a community that remains inside. Perhaps some days you feel like you can barely get yourself together, much less bring others to Christ. We feel safe in our own communities, content and comfortable. But while we’re called to remain in that peace and that community, we’re also called to go out. When Christ called his twelve apostles, the Gospel of Mark tells us, “He appointed twelve, to be with him and to be sent out to preach” (Mark 3:14). They probably would have preferred to just be with him! But they weren’t given the grace to be with him simply for themselves; they were given the graces so that they could go out. The gift of faith that we have been given does not remain uniquely ours – it propels us outward, to share what we have received.

This is why in this country it’s so vital that we have the freedom of religion, not just the freedom of worship. Our faith doesn’t belong only inside a church building, but it belongs in the streets, in our workplaces, in our families. It doesn’t mean that worship isn’t important; in fact, what happens inside that church building is the most important thing on this earth. But we believe the Eucharist is the “source and summit” of our faith. It’s not only where all our actions lead, it’s also where we get the strength to do what needs to be done in the world.

Our mission as Catholics begins and ends at the altar. The Eucharist is where we come to receive strength, and the Eucharist must be the end goal of all our activity. But in between that beginning and end is our mission of bringing others to the table. We receive our power from the Eucharist: to go out in the world on mission, to bring others to Christ and life in Him.

Our faith does not remain inside the doors of the church; our faith does not remain something we do on Sunday. It sends us forth, to serve our brothers and sisters, to bring them home to the house of God. The next time you say “I’m going to Mass,” remember that you are really saying “I’m going ….to be sent out.”  It’s not a ticket we punch once a week. It is a way of life. A mission.

Get well soon , you must take care of yourself and stay safe. God be with you ..

Really sorry to hear you are poorly Father. You are always rushing around so much . Slow down and get better.