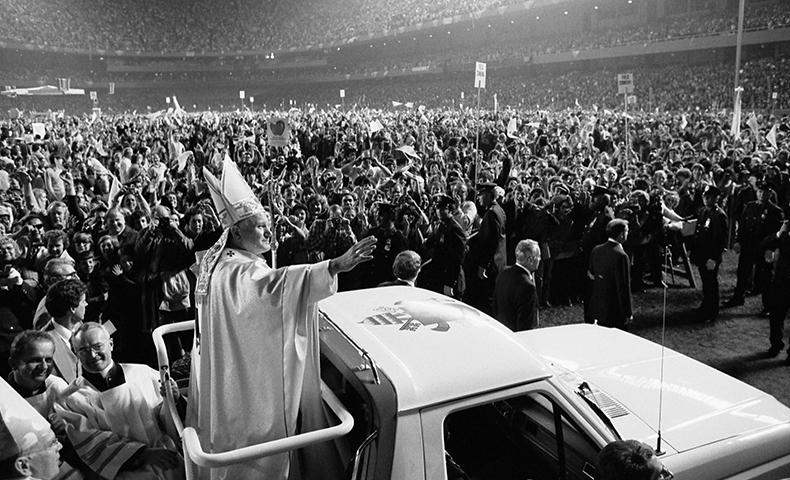 Open wide the doors to Christ,” urged John Paul II during the homily at the Mass when he was installed as pope in 1978.

Born in Wadowice, Poland, Karol Jozef Wojtyla had lost his mother, father and older brother before his 21st birthday. Karol’s promising academic career at Krakow’s Jagiellonian University was cut short by the outbreak of World War II. While working in a quarry and a chemical factory, he enrolled in an “underground” seminary in Kraków. Ordained in 1946, he was immediately sent to Rome where he earned a doctorate in theology.

Back in Poland, a short assignment as assistant pastor in a rural parish preceded his very fruitful chaplaincy for university students. Soon he earned a doctorate in philosophy and began teaching that subject at Poland’s University of Lublin.

Communist officials allowed him to be appointed auxiliary bishop of Kraków in 1958, considering him a relatively harmless intellectual. They could not have been more wrong!

He attended all four sessions of Vatican II and contributed especially to its Pastoral Constitution on the Church in the Modern World. Appointed as archbishop of Kraków in 1964, he was named a cardinal three years later.

Elected pope in October 1978, he took the name of his short-lived, immediate predecessor. Pope John Paul II was the first non-Italian pope in 455 years. In time, he made pastoral visits to 124 countries, including several with small Christian populations.

He promoted ecumenical and interfaith initiatives, especially the 1986 Day of Prayer for World Peace in Assisi. He visited Rome’s Main Synagogue and the Western Wall in Jerusalem; he also established diplomatic relations between the Holy See and Israel. He improved Catholic-Muslim relations and in 2001 visited a mosque in Damascus, Syria.

The Great Jubilee of the Year 2000, a key event in John Paul’s ministry, was marked by special celebrations in Rome and elsewhere for Catholics and other Christians. Relations with the Orthodox Churches improved considerably during his ministry as pope.

“Christ is the center of the universe and of human history” was the opening line of his 1979 encyclical, Redeemer of the Human Race. In 1995, he described himself to the United Nations General Assembly as “a witness to hope.”

His 1979 visit to Poland encouraged the growth of the Solidarity movement there and the collapse of communism in central and eastern Europe 10 years later. He began World Youth Day and traveled to several countries for those celebrations. He very much wanted to visit China and the Soviet Union but the governments in those countries prevented that.

One of the most well-remembered photos of his pontificate was his one-on-one conversation in 1983 with Mehmet Ali Agca, who had attempted to assassinate him two years earlier.

In his 27 years of papal ministry, John Paul II wrote 14 encyclicals and five books, canonized 482 saints and beatified 1,338 people. In the last years of his life, he suffered from Parkinson’s disease and was forced to cut back on some of his activities.

Before John Paul II’s funeral Mass in St. Peter’s Square, hundreds of thousands of people had waited patiently for a brief moment to pray before his body, which lay in state inside St. Peter’s for several days. The media coverage of his funeral was unprecedented.

Cardinal Joseph Ratzinger, then dean of the College of Cardinals and later Pope Benedict XVI, presided at the funeral Mass and concluded his homily by saying: “None of us can ever forget how, in that last Easter Sunday of his life, the Holy Father, marked by suffering, came once more to the window of the Apostolic Palace and one last time gave his blessing urbi et orbi (‘to the city and to the world’).

“We can be sure that our beloved pope is standing today at the window of the Father’s house, that sees us and blesses us. Yes, bless us, Holy Father. We entrust your dear soul to the Mother of God, your Mother, who guided you each day and who will guide you now to the glory of her Son, our Lord Jesus Christ. Amen.”