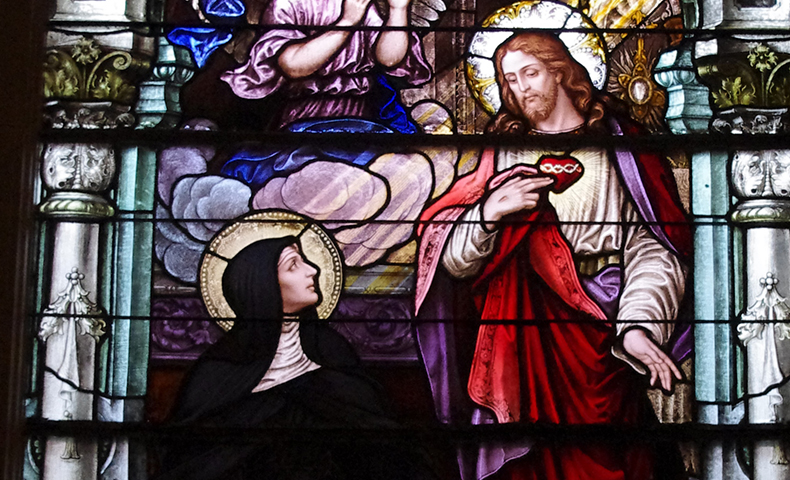 Margaret Mary was chosen by Christ to arouse the Church to a realization of the love of God symbolized by the heart of Jesus.

Her early years were marked by sickness and a painful home situation. “The heaviest of my crosses was that I could do nothing to lighten the cross my mother was suffering.” After considering marriage for some time, Margaret Mary entered the Order of the Visitation nuns at the age of 24.

A Visitation nun was “not to be extraordinary except by being ordinary,” but the young nun was not to enjoy this anonymity. A fellow novice termed Margaret Mary humble, simple, and frank, but above all, kind and patient under sharp criticism and correction. She could not meditate in the formal way expected, though she tried her best to give up her “prayer of simplicity.” Slow, quiet, and clumsy, she was assigned to help an infirmarian who was a bundle of energy.

On December 21, 1674, three years a nun, she received the first of her revelations. She felt “invested” with the presence of God, though always afraid of deceiving herself in such matters. The request of Christ was that his love for humankind be made evident through her.

During the next 13 months, he appeared to her at intervals. His human heart was to be the symbol of his divine-human love. By her own love she was to make up for the coldness and ingratitude of the world—by frequent and loving holy Communion, especially on the first Friday of each month, and by an hour’s vigil of prayer every Thursday night in memory of his agony and isolation in Gethsemane. He also asked that a feast of reparation be instituted.

Like all saints, Margaret Mary had to pay for her gift of holiness. Some of her own sisters were hostile. Theologians who were called in declared her visions delusions and suggested that she eat more heartily. Later, parents of children she taught called her an impostor, an unorthodox innovator. A new confessor, Saint Claude de la Colombière, a Jesuit, recognized her genuineness and supported her. Against her great resistance, Christ called her to be a sacrificial victim for the shortcomings of her own sisters, and to make this known.

After serving as novice mistress and assistant superior, she died at the age of 43 while being anointed. She said: “I need nothing but God, and to lose myself in the heart of Jesus.”
In the apparitions to St. Margaret Mary Alacoque, Jesus gives these twelve promises for those who are devoted to His Sacred Heart.

Our scientific-materialistic age cannot “prove” private revelations. Theologians, if pressed, admit that we do not have to believe in them. But it is impossible to deny the message Margaret Mary heralded: that God loves us with a passionate love. Her insistence on reparation and prayer and the reminder of final judgment should be sufficient to ward off superstition and superficiality in devotion to the Sacred Heart while preserving its deep Christian meaning.

Other Saints of the Day for October 16 is Saint Gerard Majella and Saint Hedwig.