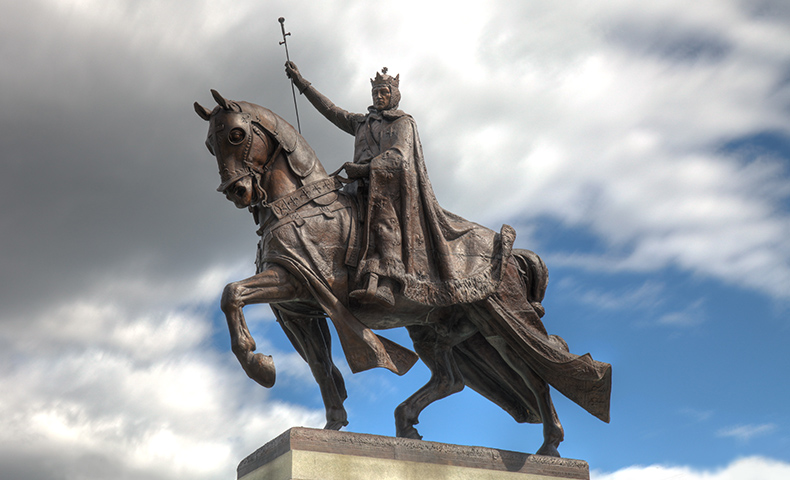 At his coronation as king of France, Louis IX bound himself by oath to behave as God’s anointed, as the father of his people and feudal lord of the King of Peace. Other kings had done the same, of course. Louis was different in that he actually interpreted his kingly duties in the light of faith. After the violence of two previous reigns, he brought peace and justice.

Louis “took the cross” for a Crusade when he was 30. His army seized Damietta in Egypt but not long after, weakened by dysentery and without support, they were surrounded and captured. Louis obtained the release of the army by giving up the city of Damietta in addition to paying a ransom. He stayed in Syria four years.

He deserves credit for extending justice in civil administration. His regulations for royal officials became the first of a series of reform laws. He replaced trial by battle with a form of examination of witnesses and encouraged the use of written records in court.

Louis was always respectful of the papacy, but defended royal interests against the popes and refused to acknowledge Innocent IV’s sentence against Emperor Frederick II.

Louis was devoted to his people, founding hospitals, visiting the sick and, like his patron Saint Francis, caring even for people with leprosy. (He is one of the patrons of the Secular Franciscan Order.) Louis united France—lords and townsfolk, peasants and priests and knights—by the force of his personality and holiness. For many years the nation was at peace.

Every day, Louis had 13 special guests from among the poor to eat with him, and a large number of poor were served meals near his palace. During Advent and Lent, all who presented themselves were given a meal, and Louis often served them in person. He kept lists of needy people, whom he regularly relieved, in every province of his dominion.

Disturbed by new Muslim advances in Syria, he led another crusade in 1267, at the age of 41. His crusade was diverted to Tunis for his brother’s sake. The army was decimated by disease within a month, and Louis himself died on foreign soil at the age of 44. He was canonized 27 years later.

Louis was strong-willed, strong-minded. His word was trusted utterly, and his courage in action was remarkable. What is most remarkable was his sense of respect for anyone with whom he dealt, especially the “humble folk of the Lord.” To care for his people he built cathedrals, churches, libraries, hospitals and orphanages. He dealt with princes honestly and equitably. He hoped to be treated the same way by the King of Kings, to whom he gave his life, his family and his country.

Saint Louis of France is the Patron Saint of: