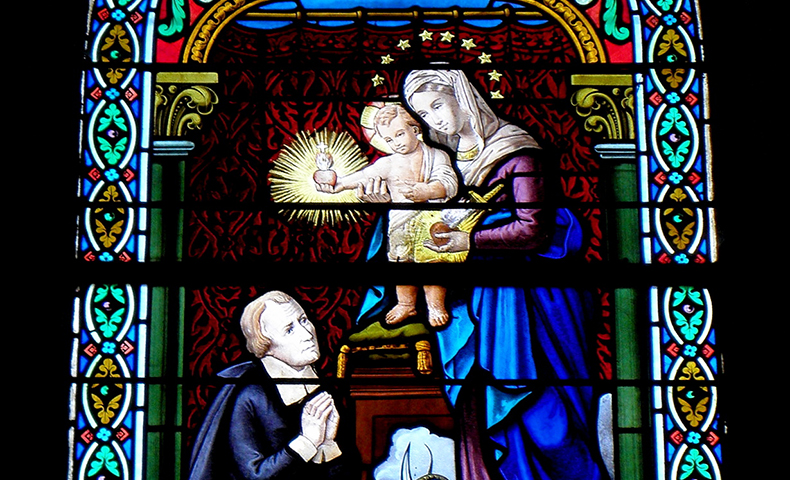 How little we know where God’s grace will lead. Born on a farm in northern France, John died at 79 in the next “county” or department. In that time, he was a religious, a parish missionary, founder of two religious communities, and a great promoter of the devotion to the Sacred Heart and the Immaculate Heart of Mary.

He joined the religious community of the Oratorians and was ordained a priest at 24. During severe plagues in 1627 and 1631, he volunteered to care for the stricken in his own diocese. Lest he infect his fellow religious, he lived in a huge cask in the middle of a field during the plague.

At age 32, John became a parish missionary. His gifts as preacher and confessor won him great popularity. He preached over 100 parish missions, some lasting from several weeks to several months.

In his concern with the spiritual improvement of the clergy, he realized that the greatest need was for seminaries. He had permission from his general superior, the bishop, and even Cardinal Richelieu to begin this work, but the succeeding general superior disapproved. After prayer and counsel, John decided it was best to leave the religious community.

The same year, he founded a new one, ultimately called the Eudists (Congregation of Jesus and Mary), devoted to the formation of the clergy by conducting diocesan seminaries. The new venture, while approved by individual bishops, met with immediate opposition, especially from Jansenists and some of his former associates. John founded several seminaries in Normandy, but was unable to get approval from Rome (partly, it was said, because he did not use the most tactful approach).

In his parish mission work, John was disturbed by the sad condition of prostitutes who sought to escape their miserable life. Temporary shelters were found, but arrangements were not satisfactory. A certain Madeleine Lamy, who had cared for several of the women, one day said to him, “Where are you off to now? To some church, I suppose, where you’ll gaze at the images and think yourself pious. And all the time what is really wanted of you is a decent house for these poor creatures.” The words, and the laughter of those present, struck deeply within him. The result was another new religious community, called the Sisters of Charity of the Refuge.

He is probably best known for the central theme of his writings: Jesus as the source of holiness, Mary as the model of the Christian life. John’s devotion to the Sacred Heart and to the Immaculate Heart of Mary led Pius XI to declare him the father of the liturgical cult of the Hearts of Jesus and Mary.

Holiness is the wholehearted openness to the love of God. It is visibly expressed in many ways, but the variety of expression has one common quality: concern for the needs of others. In John’s case, those who were in need were plague-stricken people, ordinary parishioners, those preparing for the priesthood, prostitutes and all Christians called to imitate the love of Jesus and his mother.