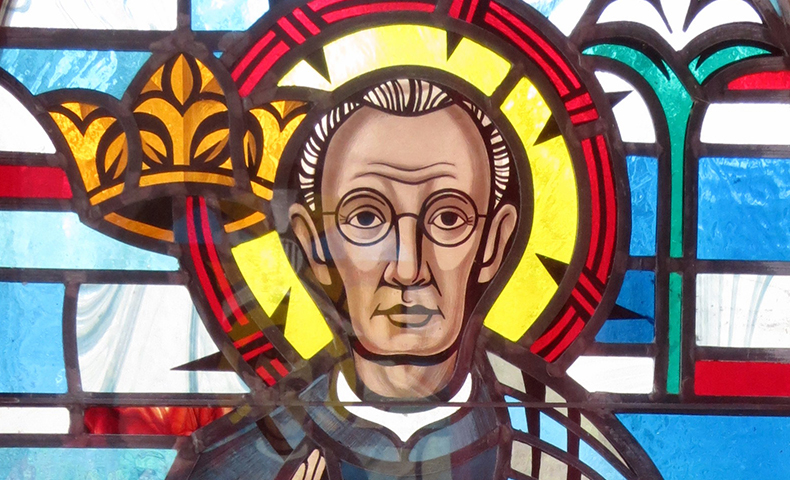 “I don’t know what’s going to become of you!” How many parents have said that? Maximilian Mary Kolbe’s reaction was, “I prayed very hard to Our Lady to tell me what would happen to me. She appeared, holding in her hands two crowns, one white, one red. She asked if I would like to have them—one was for purity, the other for martyrdom. I said, ‘I choose both.’ She smiled and disappeared.” After that he was not the same.

He entered the minor seminary of the Conventual Franciscans in Lvív (then Poland, now Ukraine), near his birthplace, and at 16 became a novice. Though he later achieved doctorates in philosophy and theology, he was deeply interested in science, even drawing plans for rocket ships.

Ordained at 24, he saw religious indifference as the deadliest poison of the day. His mission was to combat it. He had already founded the Militia of the Immaculata, whose aim was to fight evil with the witness of the good life, prayer, work, and suffering. He dreamed of and then founded Knight of the Immaculata, a religious magazine under Mary’s protection to preach the Good News to all nations. For the work of publication he established a “City of the Immaculata”—Niepokalanow—which housed 700 of his Franciscan brothers. He later founded one in Nagasaki, Japan. Both the Militia and the magazine ultimately reached the one-million mark in members and subscribers. His love of God was daily filtered through devotion to Mary.

In 1939, the Nazi panzers overran Poland with deadly speed. Niepokalanow was severely bombed. Kolbe and his friars were arrested, then released in less than three months, on the feast of the Immaculate Conception.

In 1941, he was arrested again. The Nazis’ purpose was to liquidate the select ones, the leaders. The end came quickly, in Auschwitz three months later, after terrible beatings and humiliations.

A prisoner had escaped. The commandant announced that 10 men would die. He relished walking along the ranks. “This one. That one.”

As they were being marched away to the starvation bunkers, Number 16670 dared to step from the line.

No name, no mention of fame. Silence. The commandant, dumbfounded, perhaps with a fleeting thought of history, kicked Sergeant Francis Gajowniczek out of line and ordered Father Kolbe to go with the nine. In the “block of death” they were ordered to strip naked, and their slow starvation began in darkness. But there was no screaming—the prisoners sang. By the eve of the Assumption, four were left alive. The jailer came to finish Kolbe off as he sat in a corner praying. He lifted his fleshless arm to receive the bite of the hypodermic needle. It was filled with carbolic acid. They burned his body with all the others. He was beatified in 1971 and canonized in 1982.

Father Kolbe’s death was not a sudden, last-minute act of heroism. His whole life had been a preparation. His holiness was a limitless, passionate desire to convert the whole world to God. And his beloved Immaculata was his inspiration.

Saint Maximilian Mary Kolbe is the Patron Saint of: