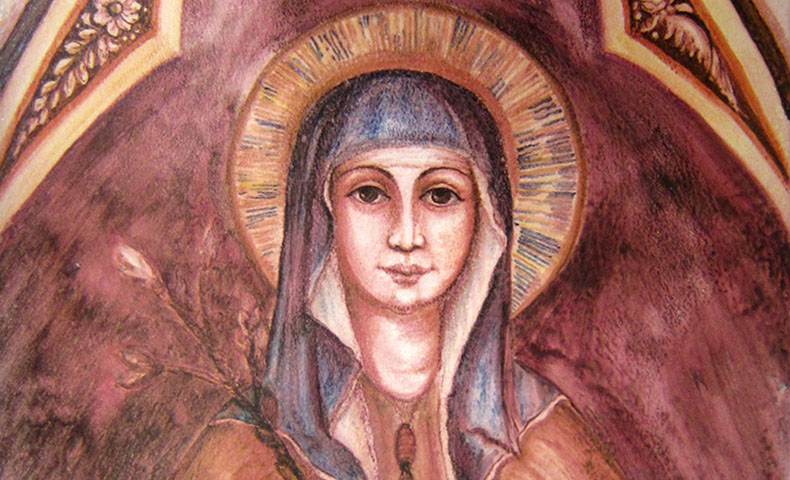 One of the more sugary movies made about Francis of Assisi pictures Clare as a golden-haired beauty floating through sun-drenched fields, a sort of one-woman counterpart to the new Franciscan Order.

The beginning of her religious life was indeed movie material. Having refused to marry at 15, she was moved by the dynamic preaching of Francis. He became her lifelong friend and spiritual guide.

At 18, she escaped one night from her father’s home, was met on the road by friars carrying torches, and in the poor little chapel called the Portiuncula received a rough woolen habit, exchanged her jeweled belt for a common rope with knots in it, and sacrificed her long tresses to Francis’ scissors. He placed her in a Benedictine convent, which her father and uncles immediately stormed in rage. She clung to the altar of the church, threw aside her veil to show her cropped hair and remained adamant.

Sixteen days later her sister Agnes joined her. Others came. They lived a simple life of great poverty, austerity, and complete seclusion from the world, according to a Rule which Francis gave them as a Second Order. Francis obliged her under obedience at age 21 to accept the office of abbess, one she exercised until her death.

The Poor Clares went barefoot, slept on the ground, ate no meat, and observed almost complete silence. (Later Clare, like Francis, persuaded her sisters to moderate this rigor: “Our bodies are not made of brass.”) The greatest emphasis, of course, was on gospel poverty. They possessed no property, even in common, subsisting on daily contributions. When even the pope tried to persuade her to mitigate this practice, she showed her characteristic firmness: “I need to be absolved from my sins, but I do not wish to be absolved from the obligation of following Jesus Christ.”

Contemporary accounts glow with admiration of her life in the convent of San Damiano in Assisi. She served the sick and washed the feet of the begging nuns. She came from prayer, it was said, with her face so shining it dazzled those about her. She suffered serious illness for the last 27 years of her life. Her influence was such that popes, cardinals, and bishops often came to consult her—she never left the walls of San Damiano.

Francis always remained her great friend and inspiration. She was always obedient to his will and to the great ideal of gospel life which he was making real.

A well-known story concerns her prayer and trust. She had the Blessed Sacrament placed on the walls of the convent when it faced attack by invading Saracens. “Does it please you, O God, to deliver into the hands of these beasts the defenseless children I have nourished with your love? I beseech you, dear Lord, protect these whom I am now unable to protect.” To her sisters she said, “Don’t be afraid. Trust in Jesus.” The Saracens fled.

The 41 years of Clare’s religious life are scenarios of sanctity: an indomitable resolve to lead the simple, literal gospel life as Francis taught her; courageous resistance to the ever-present pressure to dilute the ideal; a passion for poverty and humility; an ardent life of prayer; and a generous concern for her sisters.

Saint Clare is the Patron Saint of: