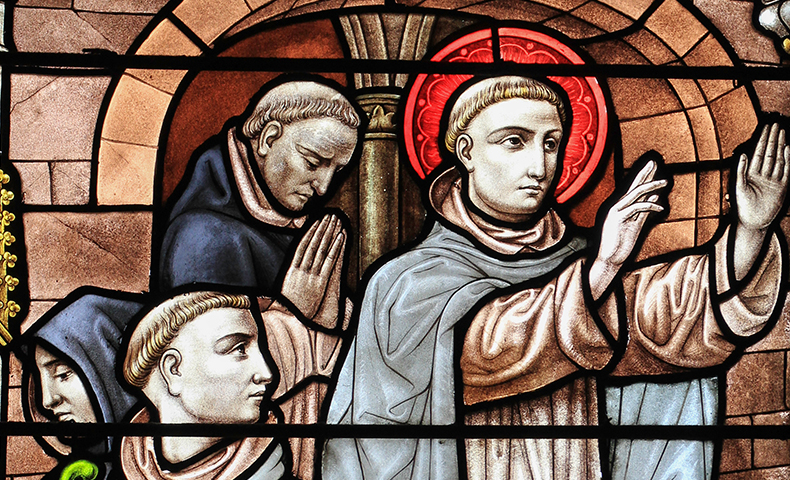 If he hadn’t taken a trip with his bishop, Dominic would probably have remained within the structure of contemplative life; after the trip, he spent the rest of his life being a contemplative in active apostolic work.

Born in old Castile, Spain, he was trained for the priesthood by a priest-uncle, studied the arts and theology, and became a canon of the cathedral at Osma, where there was an attempt to revive the apostolic common life described in the Acts of the Apostles.

On a journey through France with his bishop, he came face to face with the then virulent Albigensian heresy at Languedoc. The Albigensians (Cathari, “the pure”) held to two principles—one good, one evil—in the world. All matter is evil—hence they denied the Incarnation and sacraments. On the same principle, they abstained from procreation and took a minimum of food and drink. The inner circle led what some people regarded as a heroic life of purity and asceticism not shared by ordinary followers.

Dominic sensed the need for the Church to combat this heresy, and was commissioned to be part of the preaching crusade against it. He saw immediately why the preaching was not succeeding: the ordinary people admired and followed the ascetical heroes of the Albigenses. Understandably, they were not impressed by the Catholic preachers who traveled with horse and retinues, stayed at the best inns and had servants. Dominic therefore, with three Cistercians, began itinerant preaching according to the gospel ideal. He continued this work for 10 years, being successful with the ordinary people but not with the leaders.

His fellow preachers gradually became a community, and in 1215 he founded a religious house at Toulouse, the beginning of the Order of Preachers (Dominicans).

His ideal, and that of his Order, was to link organically a life with God, study, and prayer in all forms, with a ministry of salvation to people by the word of God. His ideal: contemplata tradere: “to pass on the fruits of contemplation” or “to speak only of God or with God.”

The Dominican ideal, like that of all religious communities, is for the imitation, not merely the admiration, of the rest of the Church. The effective combining of contemplation and activity is the vocation of truck driver Smith as well as theologian Aquinas. Acquired contemplation is the tranquil abiding in the presence of God, and is an integral part of any full human life. It must be the wellspring of all Christian activity.

Saint Dominic is the Patron Saint of: