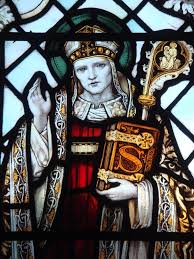 The life of St Swithun, an Anglo-Saxon bishop, is rich in legend. A century after his death in 863, he was chosen as patron saint for the Cathedral’s Benedictine monastery. His bones, housed in a splendid reliquary, became famed for their healing powers. His cult lasted until the Reformation, when all traces of his shrine were swept away.

The story of St Swithun, our parish’s much-loved Saxon patron saint, combines a handful of hard facts with many legends.

The facts are that he was born in Winchester around 800, became counsellor to the Saxon kings Egbert and Ethelwulf, and was Bishop of Winchester for the last 10 years of his life.

When he died in 863, he was buried in front of the west door of the Saxon Old Minster – you see its outlines traced in brick next to the Norman Cathedral. Here he rested for over a hundred years.

How did he become famous?

When Aethelwold, the reforming Bishop of Winchester, set up a new community Benedictine monks at Old Minster around 964, he decided they needed a new, purpose-made patron saint.

Bishop Swithun’s bones were dug up and placed them in a precious reliquary inside the building, given by King Edgar – an act later seen as against the saint’s wishes.

In the 11th century, Swithun’s relics were on the move again – this time, into the huge new Cathedral built by the Norman invaders. His Anglo-Saxon reliquary was carried with great ceremony to its new position behind the high altar, where it stayed until 1450.

His tomb became a major site for pilgrims, many seeking to be healed from illness. A short tunnel (the Holy Hole) allowed them to crawl right under his shrine, as close as possible to his miraculous healing powers.

In 1476, a new, even larger shrine was inaugurated at the far end of the building. It must have been a striking sight, festooned with gifts of silver, gold and jewels offered by grateful pilgrims.

What legends are told about him?

One legend claims that Swithun tutored the young Alfred the Great. Another says is that he built the first stone bridge over the River Itchen that runs through Winchester.

His most famous miracle tells of a simple act of human kindness to a poor woman. When crossing the bridge, she was jostled and dropped her basket of eggs. The saint took pity on her – and made her broken eggs whole.

One source claims that when Swithun died, he asked to be buried out of doors ‘where the feet of ordinary men could pass over him.’

This, and a possible mistranslation of a medieval text, may have given rise to the story that when the saint’s bones were moved inside the Old Minster on his feast day, 15 July 971, a terrible storm broke out, lasting for 40 days and nights.

This is the basis of the popular belief that if it rains on 15 July, it will rain for 40 days. Sadly, this claim has no basis in fact.

What happened to his shrine?

The cult of St Swithun and his shrine came to an abrupt end during the Reformation, when King Henry VIII seized control of the Catholic Church in England, and declared himself head of the Church of England.

On 21 September 1538, under cover of darkness at 3am in the morning, the king’s commissioners smashed it apart, and stole all the valuables. Three years later, a workman stopped up the Holy Hole.

Nothing remains of his once great shrine today, but you can see a modern memorial that marks the spot.

Here’s some other Resources about our patron saint