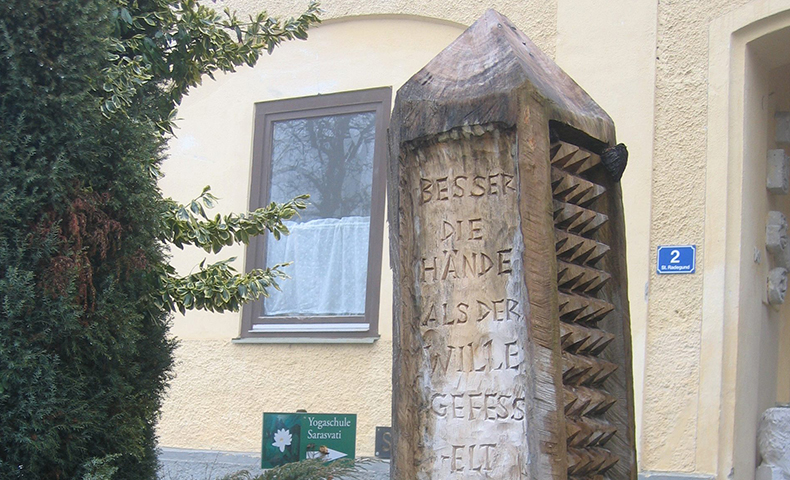 Called to serve his country as a Nazi solider, Franz eventually refused, and this husband and father of three daughters–Rosalie, Marie and Aloisia–was executed because of it.

Born in St. Radegund in Upper Austria, Franz lost his father during World War I and was adopted after Heinrich Jaegerstaetter married Rosalia Huber. As a young man, he loved to ride his motorcycle and was the natural leader of a gang whose members were arrested in 1934 for brawling. For three years he worked in the mines in another city and then returned to St. Radegund, where he became a farmer, married Franziska and lived his faith with quiet but intense conviction.

In 1938, he publicly opposed the German Anschluss, annexation, of Austria. The next year, he was drafted into the Austrian army, trained for seven months and then received a deferment. In 1940, Franz was called up again but allowed to return home at the request of the town’s mayor. He was in active service between October 1940 and April 1941, but was again deferred. His pastor, other priests, and the bishop of Linz urged him not to refuse to serve if drafted.

In February 1943, Franz was called up again and reported to army officials in Enns, Austria. When he refused to take the oath of loyalty to Hitler, he was imprisoned in Linz. Later he volunteered to serve in the medical corps but was not assigned there.

During Holy Week Franz wrote to his wife: “Easter is coming and, if it should be God’s will that we can never again in this world celebrate Easter together in our intimate family circle, we can still look ahead in the happy confidence that, when the eternal Easter morning dawns, no one in our family circle shall be missing–so we can then be permitted to rejoice together forever.” He was transferred in May to a prison in Berlin.

Challenged by his attorney that other Catholics were serving in the army, Franz responded, “I can only act on my own conscience. I do not judge anyone. I can only judge myself.” He continued, “I have considered my family. I have prayed and put myself and my family in God’s hands. I know that, if I do what I think God wants me to do, he will take care of my family.”

On August 8, 1943, Franz wrote to Fransizka: “Dear wife and mother, I thank you once more from my heart for everything that you have done for me in my lifetime, for all the sacrifices that you have borne for me. I beg you to forgive me if I have hurt or offended you, just as I have forgiven everything…My heartfelt greetings for my dear children. I will surely beg the dear God, if I am permitted to enter heaven soon, that he will set aside a little place in heaven for all of you.”

Franz was beheaded and cremated the following day. In 1946, his ashes were reburied in St. Radegund near a memorial inscribed with his name and the names of almost 60 village men who died during their military service. He was beatified in Linz on Occtober 26, 2007. His “spiritual testament” is now in Rome’s St. Bartholomew Church as part of a shrine to 20th-century martyrs for their faith.

Franz Jaegerstaetter followed his conscience and paid the highest price possible. In December 2008, his widow and three daughters were introduced to Pope Benedict XVI in connection with the presentation of a new biography, Christ or Hitler? The Life of Blessed Franz Jaegerstaetter. Many people first learned about him from Gordon Zahn’s book In Solitary Witness: The Life and Death of Franz Jaegerstaetter.

The Liturgical Feast of Blessed Franz Jaegerstaetter is May 21.