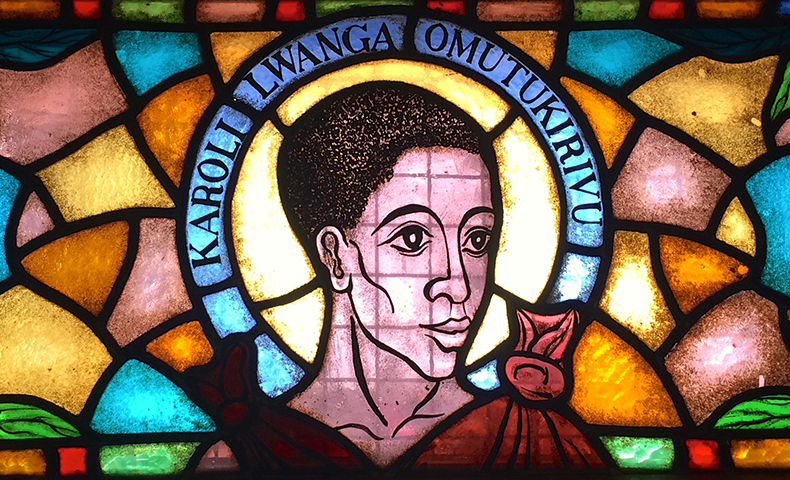 One of 22 Ugandan martyrs, Charles Lwanga is the patron of youth and Catholic action in most of tropical Africa. He protected his fellow pages, aged 13 to 30, from the homosexual demands of the Bagandan ruler, Mwanga, and encouraged and instructed them in the Catholic faith during their imprisonment for refusing the ruler’s demands.

Charles first learned of Christ’s teachings from two retainers in the court of Chief Mawulugungu. While a catechumen, he entered the royal household as assistant to Joseph Mukaso, head of the court pages.

On the night of Mukaso’s martyrdom for encouraging the African youths to resist Mwanga, Charles requested and received baptism. Imprisoned with his friends, Charles’s courage and belief in God inspired them to remain chaste and faithful.

For his own unwillingness to submit to the immoral acts and his efforts to safeguard the faith of his friends, Charles was burned to death at Namugongo on June 3, 1886, by Mwanga’s order.

When Pope Paul VI canonized these 22 martyrs on October 18, 1964, he also made reference to the Anglican pages martyred for the same reason.

Like Charles Lwanga, we are all teachers and witnesses to Christian living by the examples of our own lives. We are all called upon to spread the word of God, whether by word or deed. By remaining courageous and unshakable in our faith during times of great moral and physical temptation, we live as Christ lived.