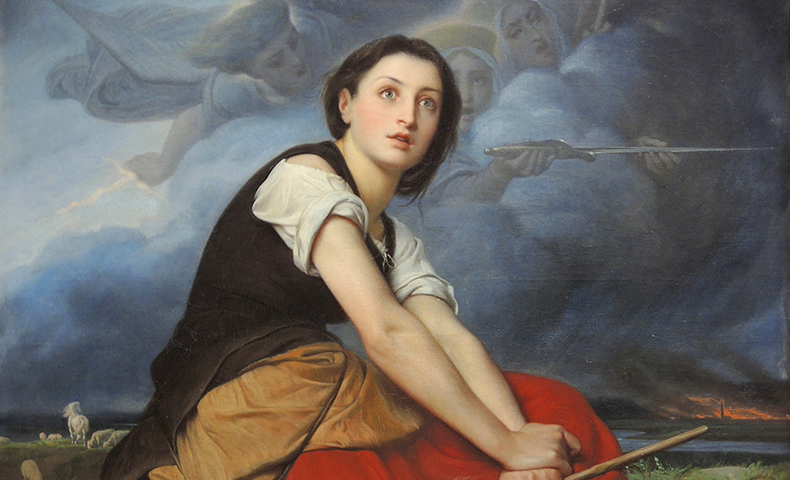 Burned at the stake as a heretic after a politically-motivated trial, Joan was beatified in 1909 and canonized in 1920.

Born of a fairly well-to-do peasant couple in Domremy-Greux southeast of Paris, Joan was only 12 when she experienced a vision and heard voices that she later identified as Saints Michael the Archangel, Catherine of Alexandria, and Margaret of Antioch.

During the Hundred Years War, Joan led French troops against the English and recaptured the cities of Orléans and Troyes. This enabled Charles VII to be crowned as king in Reims in 1429. Captured near Compiegne the following year, Joan was sold to the English and placed on trial for heresy and witchcraft. Professors at the University of Paris supported Bishop Pierre Cauchon of Beauvis, the judge at her trial; Cardinal Henry Beaufort of Winchester, England, participated in the questioning of Joan in prison. In the end, she was condemned for wearing men’s clothes. The English resented France’s military success–to which Joan contributed.

On this day in 1431, Joan was burned at the stake in Rouen, and her ashes were scattered in the Seine River. A second Church trial 25 years later nullified the earlier verdict, which was reached under political pressure.

Remembered by most people for her military exploits, Joan had a great love for the sacraments, which strengthened her compassion toward the poor. Popular devotion to her increased greatly in 19th-century France and later among French soldiers during World War I. Theologian George Tavard writes that her life “offers a perfect example of the conjunction of contemplation and action” because her spiritual insight is that there should be a “unity of heaven and earth.”

Joan of Arc has been the subject of many books, plays, operas and movies.

“Joan of Arc is like a shooting star across the landscape of French and English history, amid the stories of the Church’s saints and into our consciousness. Women identify with her; men admire her courage. She challenges us in fundamental ways. Despite the fact that more than 500 years have passed since she lived, her issues of mysticism, calling, identity, trust and betrayal, conflict and focus are our issues still.” (Joan of Arc: God’s Warrior, by Barbara Beckwith)

Saint Joan of Arc is the Patron Saint of:

Another Saint of the Day for May 30 is Saint Ferdinand III.