LET US LOOK AT THIS OCCASION AT interview based on Sister Lucia’s words: “Final Confrontation between the Lord and Satan will be over Family and Marriage.”

Q. There is a prophecy by Sister Lucia dos Santos, of Fatima, which concerns “the final battle between the Lord and the kingdom of Satan”. The battlefield is the family. Life and the family. We know that you were given charge by John Paul II to plan and establish the Pontifical Institute for the Studies on Marriage and the Family.

Yes, I was. At the start of this work entrusted to me by the Servant of God John Paul II, I wrote to Sister Lucia of Fatima through her Bishop as I couldn’t do so directly. Unexplainably however, since I didn’t expect an answer, seeing that I had only asked for prayers, I received a very long letter with her signature – now in the Institute’s archives. In it we find written: the final battle between the Lord and the reign of Satan will be about marriage and the family. Don’t be afraid, she added, because anyone who operates for the sanctity of marriage and the family will always be contended and opposed in every way, because this is the decisive issue. And then she concluded: however, Our Lady has already crushed its head.

Talking also to John Paul II, you felt too that this was the crux, as it touches the very pillar of creation, the truth of the relationship between man and woman among the generations. If the founding pillar is touched the entire building collapses and we see this now, because we are at this point and we know it. And I’m moved when I read the best biographies of Padre Pio , on how this man was so attentive to the sanctity of marriage and the sanctity of the spouses, even with justifiable rigor on occasion.

Does this come as any surprise to those watching the events currently unfolding in the Church? We have referenced various apparitions in the past that are related to this, beginning with Our Lady of Good Success, in the 17th century:

“Thus I make it known to you that from the end of the 19th century and shortly after the middle of the 20th century…the passions will erupt and there will be a total corruption of morals… As for the Sacrament of Matrimony, which symbolizes the union of Christ with His Church, it will be attacked and deeply profaned. Freemasonry, which will then be in power, will enact iniquitous laws with the aim of doing away with this Sacrament, making it easy for everyone to live in sin and encouraging procreation of illegitimate children born without the blessing of the Church… In this supreme moment of need for the Church, the one who should speak will fall silent.”

When we reflect on the division among prelates at the Synod, Our Lady of Akita comes to mind:

“The work of the devil will infiltrate even into the Church in such a way that one will see cardinals opposing cardinals, bishops against bishops. The priests who venerate me will be scorned and opposed by their confreres…churches and altars sacked; the Church will be full of those who accept compromises and the demon will press many priests and consecrated souls to leave the service of the Lord.”

Catholics are not required to believe in even the most approved and venerated private revelations, but many of us choose to do so. Does this battle relate to the famous discourse Pope Leo XIII was alleged to have heard in a vision between Christ and Satan, which led him to compose the prayer to St. Michael? How long the final battle will last, and what will come after? It is impossible to know. But the notion that there is at this very moment a battle taking place for the heart of the Church and the souls of the faithful is no longer in dispute. 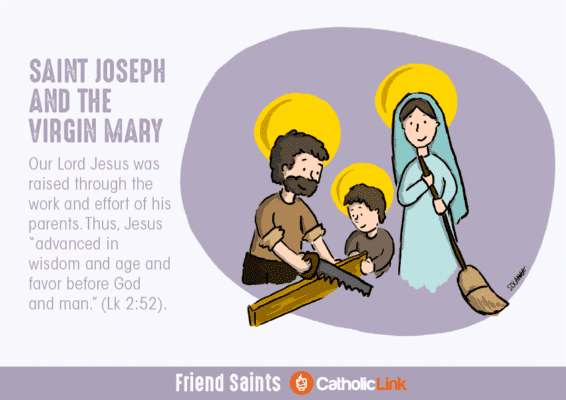 These Saints who were friends discovered that the experience of authentic friendship is a real treasure. It is, as Elredo de Rieval said, “the homeland of those in exile, the wealth of the poor, the medicine of the sick, the grace of the healthy, the strength of the weak, Who is strong.”

A real friend truly wants every good for his friend, every available grace; wants to share with him all his own joys and sorrows, living them with one heart. In short, he wants, with all the strength of his soul, the happiness of the other. This, I am convinced, is what the saints lived. Whether as brothers & sisters, spouses or friends, they knew how to live that limitless charity of Christ, who gave His life for His friends. To have a friendship anchored in Jesus allows us not to be emigrants, nor foreigners; it allows us to become the home of the other. Having a friend is having the need to help the other to live. Antoine de Saint-Exupéry expresses it in a very beautiful way:

“So, my friend, I need you as I need a high place where I can breathe freely. I need to sit beside you, once more […] celebrating a smile as calm as the day itself. As long as I have any fight in me, I will fight a little for you. I need you in order to believe more strongly in this smile. I am compelled to help you live.”

And so today we start to present 10 inspiring stories of holiness built in the midst of a deep friendship. Enjoy and share about these Saints who were friends in real life! Saints Who Were Friends