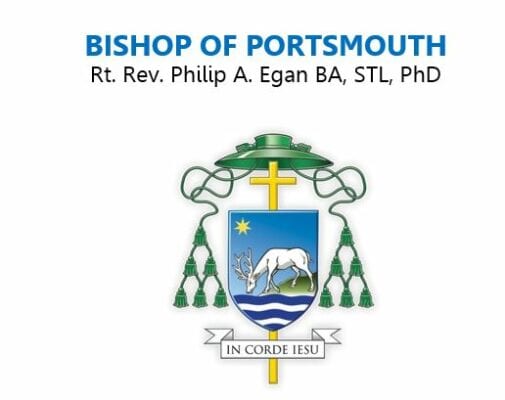 A growing awareness of the magnitude of child sexual abuse, especially abuse committed in religious institutions, is prompting government leaders and legislators in Australia, Britain, Ireland, the United States and in many other places to call for laws that would compel priests to violate the sacramental seal and to report instances of child sexual abuse confided to them in the confessional. Many people who are not Catholics do not understand the Sacrament of Reconciliation and its ‘seal.’ Some are even suspicious of it. Thus, in its conclusions about child sexual abuse within the Catholic Church in Australia, the 2019 Australian Royal Commission asserted that “the practice of the Sacrament of Reconciliation (Confession) contributed to both the occurrence of child sexual abuse in the Church and to inadequate institutional responses to abuse.” Disclosures of “child sexual abuse by perpetrators or victims during confession were not reported to civil authorities or otherwise acted on” because some priests “viewed child sexual abuse as a sin to be dealt with through private absolution and penance rather than as a crime to be reported to police.” Consequently, the Commission recommended that confessors be mandated to report to the civil authorities a penitent who confesses child-abuse or is suspected of child-abuse (Recommendation 7.4). Moreover, the Commission asked whether absolution “can and should be withheld” until such a penitent reports themselves to the civil authorities (16.26).

It is undoubtedly true that the abhorrent and truly evil act of child abuse can never be condoned or protected, and it is also true that in many instances over the last fifty years or so, across the Church, there has been a woeful lack in proper safeguarding processes to protect the vulnerable. In a number of cases, it is a disgrace that leaders in the Church have covered up abuse. However, on the other hand, it is imperative that the holy seal of Confession is not confused with some kind of defence or cover-up of the guilty. This is why, in order to shine a brighter light on these matters, I offer the following points from Catholic doctrine and practice. This, of course, is not the last word on this topic, but I hope hereby to correct some chief misunderstandings and to clarify the nature of the seal: what it is, why it is, and why it is inviolable. 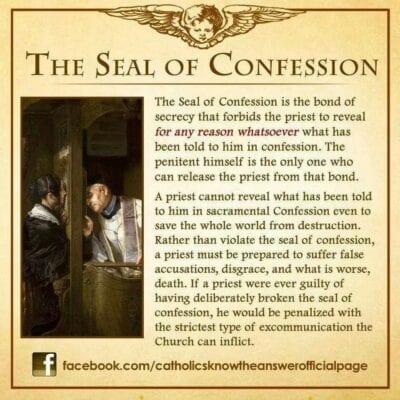 1. What is the ‘seal’ of confession? Can it ever be broken?

The Catholic Church believes that in the Sacrament of Penance and Reconciliation (“Confession”) a member of the Church who confesses their sins to a priest or bishop, who are truly repentant and sorry for them, who resolve to reform themselves and willingly to undertake penance and restitution, can obtain from God, through the ‘absolution’ (the sacred action of the ‘Sign of the Cross’ and the formula of words) imparted by the minister, forgiveness for their sins (cf. Catechism of the Catholic Church 1422-1424). Catholics believe that Jesus Christ Himself gave the ministers of His Church the power to hear confessions and to grant absolution when He said: “As the Father sent me, so am I sending you. Receive the Holy Spirit. For those whose sins you forgive, they are forgiven. For those whose sins you retain, they are retained” (John 20: 21-23).

A priest can never tell anyone what the ‘penitent’ (the person making the confession) has told him or make use of any knowledge that Confession has given him about a penitent’s life. A bishop or priest who hears confessions “is bound under very severe penalties to keep absolute secrecy regarding the sins that his penitents have confessed to him. This solemn obligation, which admits of no exceptions, is called the ‘sacramental seal,’ because what the penitent has made known to the priest remains ‘sealed’ by the sacrament” (Catechism of the Catholic Church 1467). In the administration of this sacrament, the priest acts in the Person of Christ: he is not hearing confessions as himself; rather, he is the vehicle or means by which the penitent confesses their sins to God and by which the penitent receives from God mercy and forgiveness. The priest ‘merely’ facilitates the sacred communication between the penitent and God: any information he hears does not belong to him and so is not his to reveal.

The sacramental seal is “inviolable” and the Code of Canon Law applies the severest penalties to a priest who breaks it. A priest hearing a person’s confession (called a ‘confessor’) “who directly violates the sacramental seal incurs .. [automatic] excommunication” (Can. 1388 §1), a penalty which can be lifted only by the Apostolic See in Rome. It is “absolutely forbidden for a confessor to betray in any way a penitent in words or in any manner and for any reason” (Can. 983 §1). This is why priests take exceptional care protecting it. Even popular culture recognises this, as in Alfred Hitchcock’s film I Confess (1953), about a priest who hears the confession of a murderer and is put in a difficult position. Many priests would identify with the weight and even burden of this priest’s ministry, that is, wanting to tellthe police about the murderer, and yet needing to remain rooted in the sacrament’s divine nature. In history, many priests have shewn great bravery protecting the seal and some, like St. Nepomuk and St. Mateo Correa Magallanes, have preferred martyrdom rather than violate it.

Confession responds to a basic human need: to relieve and unburden one’s conscience by receiving God’s mercy. Admittedly, this conviction comes from a religious world-view, in which life has a vertical, invisible, spiritual dimension as well as a horizontal, visible, material dimension. It will be largely incomprehensible from a secular or non-religious viewpoint. These different world-views bring with them different anthropologies or understandings of what it means to be human, with different ethical codes and approaches to many of today’s hot-button issues such as sexuality, marriage and the family, the dignity of life and what constitutes human happiness. For Catholics, Confession is an example of the freedom of religion afforded by contemporary society. Indeed, in a specific way, it is a profound exercise of a person’s freedom of conscience: that is, to pray to God and to order rightly and justly one’s relationship with Him. 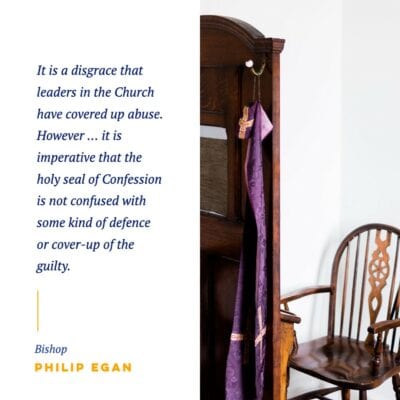 2. What if a penitent confesses child abuse?

If during the Sacrament of Reconciliation, a penitent confesses the abuse of a child or vulnerable adult (either recently or historically), then, as with any grave sin that is a serious civil offence (e.g. murder), the confessor will typically do all in his power to persuade the penitent to declare themselves afterwards to the statutory authorities. This is because a genuine contrition for sins, a firm purpose of amendment and a willingness to undertake penance and restitution is an irreplaceable and necessary precondition for the valid and effective celebration of the sacrament. An abuser cannot receive absolution unless as part of their contrition and desire to stop, they are prepared to present themselves to the appropriate authorities and to engage in the judicial process that will help them make reparation for the damage done. If this intention is absent or not genuinely present, then typically the confessor might postpone absolution, carefully explaining the reasons. The confessor, of course, continues to be bound during and afterwards by the sacramental seal.

3. What if, during their confession, a penitent mentions they have been abused?

If during the sacramental encounter, a penitent mentions that as a child or a vulnerable adult (either recently or historically), they were abused, then, the confessor typically in his counsel will seek to persuade the penitent after Confession, if they have not done so already, to notify the statutory authorities (e.g. the police, the diocesan safeguarding team, etc.). A serious crime has been committed, and so justice needs to be established. Indeed, the perpetrator may still be at large abusing others. At the same time, the confessor will typically want to reassure the penitent that they themselves are not in the wrong, that they are a victim, deserving of help, protection and care, and that through prayer and the sacraments they can find the healing mercy of God.

Congratulations Brian and Linda. We are five years behind you

Is it 50yrs Brian and Linda??x

Congratulations Len and Mary, and Brian and Linda🥂