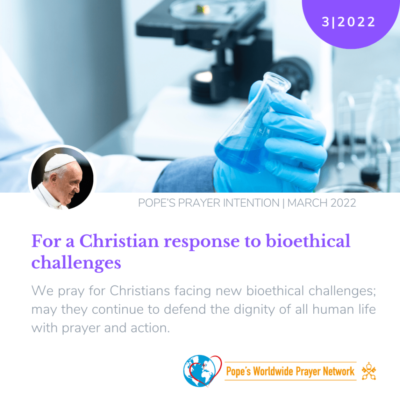 Universal intention – For a Christian response to bioethical challenges

We pray for Christians facing new bioethical challenges; may they continue to defend the dignity of all human life with prayer and action.

Modern physics has learned that under conditions of enormous pressure, the nuclei of hydrogen atoms can fuse into helium and in the process give off remarkable amounts of energy. This energy was first predicted by Einstein’s famous equation, E = mc2. It is the source of the energy that makes the sun and the stars shine. And it is the power behind hydrogen bombs.

You can accept Einstein’s physics and pray that humanity rejects nuclear warfare. But it’s easy to confuse the science of how the universe works with the technology developed from that knowledge. And technology itself is different from the purposes, good or bad, to which it is directed… including the inevitable, unexpected consequences of technology that is used even with the best of intentions.

When we study biology we come close to God, the Creator of all living things. The miracle of life includes not only the fact that life itself exists but the amazing truth that we, ourselves God’s living creations, have been given the ability to understand life and cultivate it. We have the power to cure disease and alleviate suffering. We also have the freedom to abuse that power, using it for selfish ends or withholding it from others out of greed or malice.

Advances in the biological sciences lead to advances in medical technology. But as profound as the efforts of the scientists and doctors is to make those advances, the philosophers, ethicists, and theologians exert a similar effort when they seek to understand that knowledge, how to use it wisely and deal with its consequences. They, too, are under enormous pressures; and they, too, will not always get it right.

They deserve our attention, and our prayers. Lord our God, the Creator of all things visible and invisible, hear us!

You have given us the power, the freedom, and the responsibility to understand and act according to Your laws, both moral and scientific. In all that we learn and learn how to do, may we grow not in pride but humility; may our knowledge only increase our amazement at You and Your creation.

As our technology, especially medical technology, gives us new scope for temptations to indulge in the old sins – pride, greed, envy, and the rest – we know that we cannot resist these temptations by burying our heads, or our talents, in the ground. We can only do so with Your grace.

Give us prudence, temperance, and justice in the works of our hands. May all we do promote the dignity of all human life. And may You be with those who struggle to understand the social and moral implications of our knowledge, so that they may best teach us how to understand Your will.

WHAT IS THE POPE’S WORLDWIDE PRAYER NETWORK?

The Pope’s Worldwide Prayer Network (Apostleship of Prayer) addresses the challenges facing humanity and assists the mission of the Church. We pray and work to meet the challenges of the world identified by the Pope in his monthly intentions, while walking a spiritual path called the “Way of the Heart.”

What is the process in the preparation of the prepared prayer intentions?

The faithful from around the world suggest papal prayer intentions in each country to their national office, which selects some of them and sends those to the international office of the Pope’s Worldwide Prayer Network in Vatican City. Through prayerful discernment the international office selects a large number of them and submits them to the Pope to help his discernment. After his prayer and discernment he entrusts to the International Director of the Pope’s Worldwide Prayer Network the official set of monthly prayer intentions, which are then translated into the major world languages and published in print and digital formats.