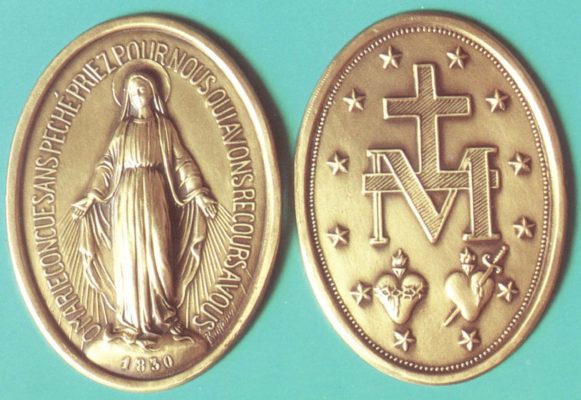 These are witnesses of faith and a sign of veneration of the Holy Mother of God, as well as of trust in her maternal protection. The Church blesses such objects of Marian devotion in the belief that “they help to remind the faithful of the love of God, and to increase trust in the Blessed Virgin Mary.”

The Miracle of the Miraculous Medal: Designed and Revealed by the Blessed Virgin

The Medal of the Immaculate Conception, popularly known as the Miraculous Medal, is unique among all medals.

The Miraculous Medal was created in response to a request from the Blessed Virgin Mary, who entrusted us with our mission. It was given by the Blessed Virgin Mary herself! No wonder, then, that it gives such extraordinary graces to those who wear it and pray for Mary’s intercession and help. Our Lady manifested the Medal to St. Catherine Labouré on November 27, 1830, in the mother-house of the Daughters of
Charity of St. Vincent de Paul and St. Louise de Marillac, in Paris. 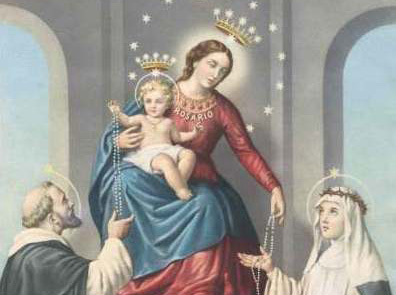 During the night of July 18-19, 1830, the Most Holy Virgin appeared for the first time to Saint Catherine Labouré, who had been awakened and led from the dormitory to the chapel by her guardian angel.

“I heard something like the rustling of a silk dress, coming from the side of the tribune, close to Saint Joseph’s picture. She alighted on the steps of the altar on the Gospel side, in an arm chair like Saint Anne’s… As I looked up at Our Lady I flung myself close to her, falling on my knees on the altar steps, my hands resting in her knees. That was the sweetest moment of my life.”

Catherine saw Our Lady standing on a globe, with dazzling rays of light streaming from her outstretched hands. Framing the figure was an inscription: “O Mary, conceived without sin, pray for us who have recourse to thee.” Then Mary spoke to Catherine: “Have a medal struck upon this model. Those who wear it will receive great graces, especially if they wear it around the neck.”

The vision then seemed to turn to show the reverse of the Medal: the letter M surmounted by a cross with a bar at its base; below this monogram, the Sacred Heart of Jesus crowned with thorns, and the Immaculate Heart of Mary pierced with a sword.

With approval of the Catholic Church, the first medals were made in 1832 and were distributed in Paris. Almost immediately the blessings that Mary had promised began to shower down on those who wore her medal, and soon all of France was clamouring for what the people referred to as the “Miraculous Medal.” Use of the Medal spread from country to country and now blankets the world. Everywhere, the Medal is still drawing down from God blessings for body and soul.

As far as we know, the photograph on the left reveals what the first Miraculous Medals might have looked like when they were made and distributed in the 1830s. This would be about two years after Our Lady manifested the Medal to St. Catherine Labouré on November 27, 1830, in the Apparition Chapel of the mother-house of the Daughters of Charity in Paris.

Good evening Father and everyone

Good evening everyone. Happy Tuesday to you all

Good Evening everyone including Fr and hopefully Bilbo too 🐾

Good evening one and all. I hope everyone's well.

Good evening Father Marcin and friends . We are looking forward to this evening Launce and Sandra .

Good evening Father and good evening everyone from Sylwia & Ashley 🍷🍷🍷🙏🙏🙏🙏

Bilbo was praying too?🐾🙏🏽

It was good evening. They had fun.

Good evening Father and everyone 🍷

Thank you Father, God bless you

My Lord and my God

TUESDAY - 19-01-2021 - of the 2nd Week in Ordinary TimeST SWITHUN's CHURCH IS OPEN FOR PUBLIC CELEBRATIONS:- please keep a proper distance;- sanitize a place which was in contact of your body;- if you will come with children, please do not allow children to walk, run in the church, to avoid many any contact with other people and more places touched which will ne to be sanitize;- keep one direction way and exit the church by the deigned exits;- Please do bear this in mind: the doors must be left open for a good ventilation, so as the temperature drops in the weeks ahead it will be important to wrap-up warm;SACRAMNET OF CONFESSION FROM 9.00am to 9.25am & from 6.30 to 6.55pmOUR PLAN IS: (also live-streamed):6.15am - The act of consecration oneself to Jesus Christ through Mary (19/33) - in Polish;6.30am - The Holy Mass (in Polish): 16th Gregorian Mass for +Trevor Anthony Evans;9.00am - Exposition of The Blessed Sacrament;9.30am - Divine Mercy Chaplet followed by Benediction;10.00am - The Holy Mass. Intention: + Dreyda and Fredrick Knight RIP; followed by The Holy Rosary Prayer & daily devotion;11.15am - ‘MORNING COFFEE WITH MYSTICS’ brewed by Fr Marcin;12.00noon - The act of consecration oneself to Jesus Christ through Mary (19/33) - in Polish;7.00pm - The Holy Mass. Intention: + O'Connor Family RIP;8.00pm - ‘A GLASS OF WINE’ with Fr Marcin – Q&A of The Catholic Faith;9.00pm - The act of consecration oneself to Jesus Christ through Mary (19/33) - in Polish;PLEASE, pray today especially for our Dear Michael, Fr Zbigniew Zybała, Waldomiro Oliveira, Anthony, Kathleen & Kevin, Jo, Maria, Mary, Joanna's Parents, Anne, Joey, Charlie, Xander, our First Communion Children, especially this week - Finlay and His Family, and for our Parish, For our ONLINE CATHOLIC SCHOOL😇🙏 ... See MoreSee Less