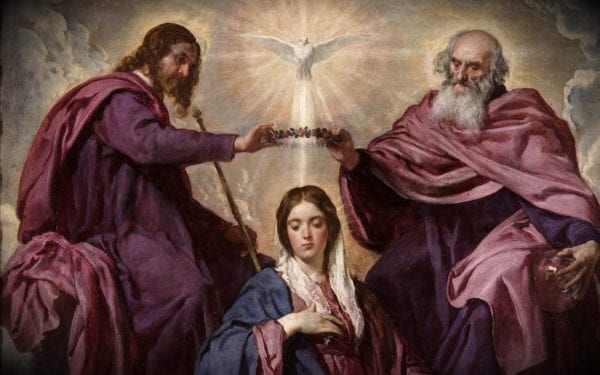 In our observance of the Marian month we should take into account the season of the Liturgical Year which largely corresponds with the fifty days of Easter. Our pious exercises could emphasize Our Lady’s participation in the Paschal mystery and in Pentecost with which the Church begins. The pious exercises connected with the month of May can easily highlight the earthly role played by the glorified Queen of Heaven, here and now, in the celebration of the Sacraments of Baptism, Confirmation and Holy Eucharist. The following practices which are recommended by the Magisterium are offered as suggestions for honouring Our Lady during Her month.

The following practices which are recommended by the Magisterium are offered as suggestions for honoring Our Lady during Her month.

The Regina Coeli
The ecclesial community addresses this antiphon to Mary for the Resurrection of her Son. It adverts to, and depends on, the invitation to joy addressed by Gabriel to the Lord’s humble servant who was called to become the Mother of the saving Messiah.

The Rosary
Also called the Psalter of the Blessed Virgin Mary, the Rosary is one of the most excellent prayers to the Mother of God. Thus, “the Roman Pontiffs have repeatedly exhorted the faithful to the frequent recitation of this biblically inspired prayer which is centered on contemplation of the salvific events of Christ’s life, and their close association with the Virgin Mother.”

Litanies of the Blessed Virgin Mary
These consist of a long series of invocations to Our Lady, which follow in a uniform rhythm, thereby creating a stream of prayer characterized by insistent praise and supplication.

Consecration and Entrustment to Mary
The Roman Pontiffs have frequently expressed appreciation for the pious practice of “consecration to the Blessed Virgin Mary” and the formulas publicly used by them are well known.

Louis Grignon de Montfort is one of the great masters of the spirituality underlying the act of “consecration to Mary”. He “proposed to the faithful consecration to Jesus through Mary, as an effective way of living out their baptismal commitment.”

The Brown Scapular and other Scapulars
The scapular is an external sign of the filial relationship established between the Blessed Virgin Mary, Mother and Queen of Mount Carmel, and the faithful who entrust themselves totally to her protection, who have recourse to her maternal intercession, who are mindful of the primacy of the spiritual life and the need for prayer.

Medals
These are witnesses of faith and a sign of veneration of the Holy Mother of God, as well as of trust in her maternal protection.The Church blesses such objects of Marian devotion in the belief that “they help to remind the faithful of the love of God, and to increase trust in the Blessed Virgin Mary.”

The “Akathistos” Hymn
In the Byzantine tradition, one of the oldest and most revered expressions of Marian devotion is the hymn of the “Akathistos” — meaning the hymn sung while standing. It is a literary and theological masterpiece, encapsulating in the form of a prayer, the universally held Marian belief of the primitive Church.

Peace Be With You

Thank you Fr Marcin for this blessed mass

Thanks be to God. Thank you Father

Peace be with you all 🥀

Good morning all. Hope we all have a great day.

Peace be with you all.