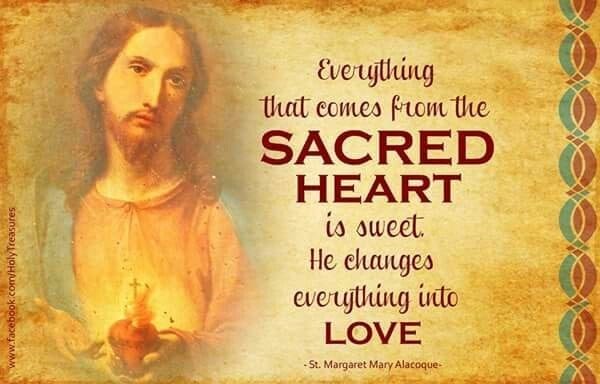 Devotion to the Sacred Heart of Jesus is a very, very old practice originally arising out of devotion to the Sacred wounds of Christ and all that His sacrifice for us embodied. It is a beautiful practice with which you can get closer to Jesus in contemplation of the Passion and His most perfect sacrifice. In 1899, the human race was dedicated to the Sacred Heart of Jesus through Pope Leo XIII’s decree in his encyclical Annum Sacrum. Pope Pius X extended this by instituting this dedication be renewed yearly.

The Feast Day for the Sacred Heart of Jesus falls 19 days after Pentecost. This year 2019, it will fall on June 28TH. The devotion is often tied to the devotion to the Immaculate Heart of Mary, which occurs a day after.

Understood in the light of the Scriptures, the term “Sacred Heart of Jesus” denotes the entire mystery of Christ, the totality of his being, and his person considered in its most intimate essential: Son of God, uncreated wisdom; infinite charity, principal of the salvation and sanctification of mankind. The “Sacred Heart” is Christ, the Word Incarnate, Saviour, intrinsically containing, in the Spirit, an infinite divine-human love for the Father and for his brothers.

Excerpted from the Directory on Popular Piety and the Liturgy

Thank you Father for offering this Holy Mass for Baby Emma

CHRISTIAN MORNING MEDITATION:Reproach for Repentance 14 July 2020Tuesday of the Fifteenth Week in Ordinary TimeMatthew 11:20-24Jesus began to reproach the towns where most of his mighty deeds had been done, since they had not repented. “Woe to you, Chorazin! Woe to you, Bethsaida! For if the mighty deeds done in your midst had been done in Tyre and Sidon, they would long ago have repented in sackcloth and ashes. But I tell you, it will be more tolerable for Tyre and Sidon on the day of judgment than for you. And as for you, Capernaum: Will you be exalted to heaven? You will go down to the nether world. For if the mighty deeds done in your midst had been done in Sodom, it would have remained until this day. But I tell you, it will be more tolerable for the land of Sodom on the day of judgment than for you.”Opening Prayer: Lord Jesus, let me never tire in spirit or become interiorly resistant to see where your love is calling me to ask for your forgiveness. May my help and my salvation be always to lean more deeply upon your mercy and to be more spiritually aware of what in my life causes your heart sorrow. Encountering Christ: 1. Repentance: Throughout this discourse, we can detect in the voice of Jesus a note of exasperation. His heart is lamenting the unrequited love of stubborn hearts unwilling to repent; the ingratitude, indifference, and rejection of such hearts in this moment of anguish. He finds no comfort in hearts who betray him and cannot see what mighty deeds he has done for us. 2. Rejection and Remorse: The spiritual battle going on in our hearts is real. There are difficulties, struggles, and hardships that we have to conquer to be faithful in courageously living for Christ’s Kingdom of justice and love. We are all caught up in this drama. While following the Lord I have fallen and turned away from him and resisted his will. At times, I have said “no” out of fear, defiance, and greed. Lord, I come to you and humbly ask for your forgiveness and mercy. Forgive me my sins. Do not let me turn away from you. 3. Judgment Day: The hour is coming, our hour to be welcomed into the eternal embrace of the Father. It will also come with a settling of accounts where we will see the truth of our lives in the full light of God’s merciful love. Jesus’s passionate exhortation invites us to look into our hearts now, to imagine our final reckoning. This practice can be a good remedy against any inclination we have to pass judgment on others. It can help to soften the harshness or stubbornness of our hearts. Conversing with Christ: Lord, be with me throughout this day, guiding my mind and heart to see the wonders of your actions, the great things you are doing in my life. Grant me the courage to face whatever happens today by responding in a way that pleases you so that I can see the Father’s plan for me more clearly. Open my heart and mind to be attuned to your presence both within me and through those around me today.Resolution: Lord, today by your grace, I will be quick to seek forgiveness of any fault or harm I may cause you or others and I will make a special effort not to judge others, asking for your grace to dismiss any harsh thoughts or criticisms. stswithuns.org.uk/event/dr-14072020 ... See MoreSee Less

I pray this prayer after Holy Communion daily.

Good evening to everyone and you too Annie ❤️

Good evening everyone..sorry we are late but we have had trouble with the internet Ann & Peter

Please could I ask for your prayers for my cousin whom has also just given birth to a Beautiful girl Vienna💕..Pembe had a difficult birth & needing a blood transfusion ..Thank Youx🙏🙏

Thanks for helping me out with that, Father. I just noticed that verse was being used a lot by pro-abortion types so I wanted to be better equipped to deal with it.

Celebrations in our family a new baby girl joined us, Lily May, she is so cute and small 🙏🏻

Thank you for mentioning that we are engraved by HIM🙏

The evening Mass started in Hampshire because Workers had to work on Sundays.

Good evening everyone. I hope you are all well

Good evening Father and all my friends

Good evening one and all! Len andMary❤️❤️

Hello 👋 everyone, Fr and hopefully Bilbo too 🐾?😁

We had Saturday evening, two on Sunday morning, then the Sunday evening