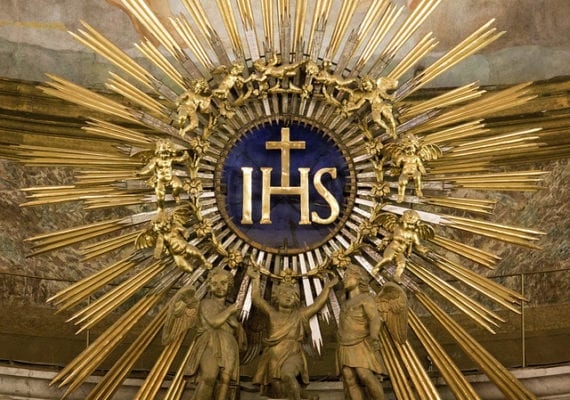 Monogram for the Holy Name

According to the ancient mind, a person’s name was the expression of his nature, work, or mission. Early Christians accordingly used our Saviour’s Name to bring to mind His adorable Person; and in their art they gave it the following shortened or symbolic forms:

b) The IHS Symbol. The familiar abbreviation IHS is a symbol of the Name Jesus which has retained its popularity down through the centuries. It owes its spread to Saint Bernardine of Siena, who had it placed on his banner, surrounded with twelve rays of the sun and surmounted by a cross. It soon became the most popular monogram for the holy Name of Jesus. By his fervent words Saint Bernardine of Siena, persuaded many priests to place the letters on altars or on the interior and exterior walls of churches. Many Italian cities responded to his efforts and put the monogram in large letters on the outer walls of their town halls, as may still be seen in Siena.

What is its derivation?

IHC is the abbreviation of the Greek ΙΗΣΟUΣ, i.e., Jesus (the first three letters of the word). The older form for the Greek sigma, S, resembled our capital C. In Christian antiquity this monogram does not occur too frequently and may not be older than the fifth century. In recent centuries the IHS has been falsely interpreted as Jesus Hominum Salvator, or even Jesu humilis societas (and regarded as a colophon for the Society of Jesus). Another interpretation that is sometimes made is In Hoc Signo (vinces), and out of the added v (for vinces) three nails are formed.