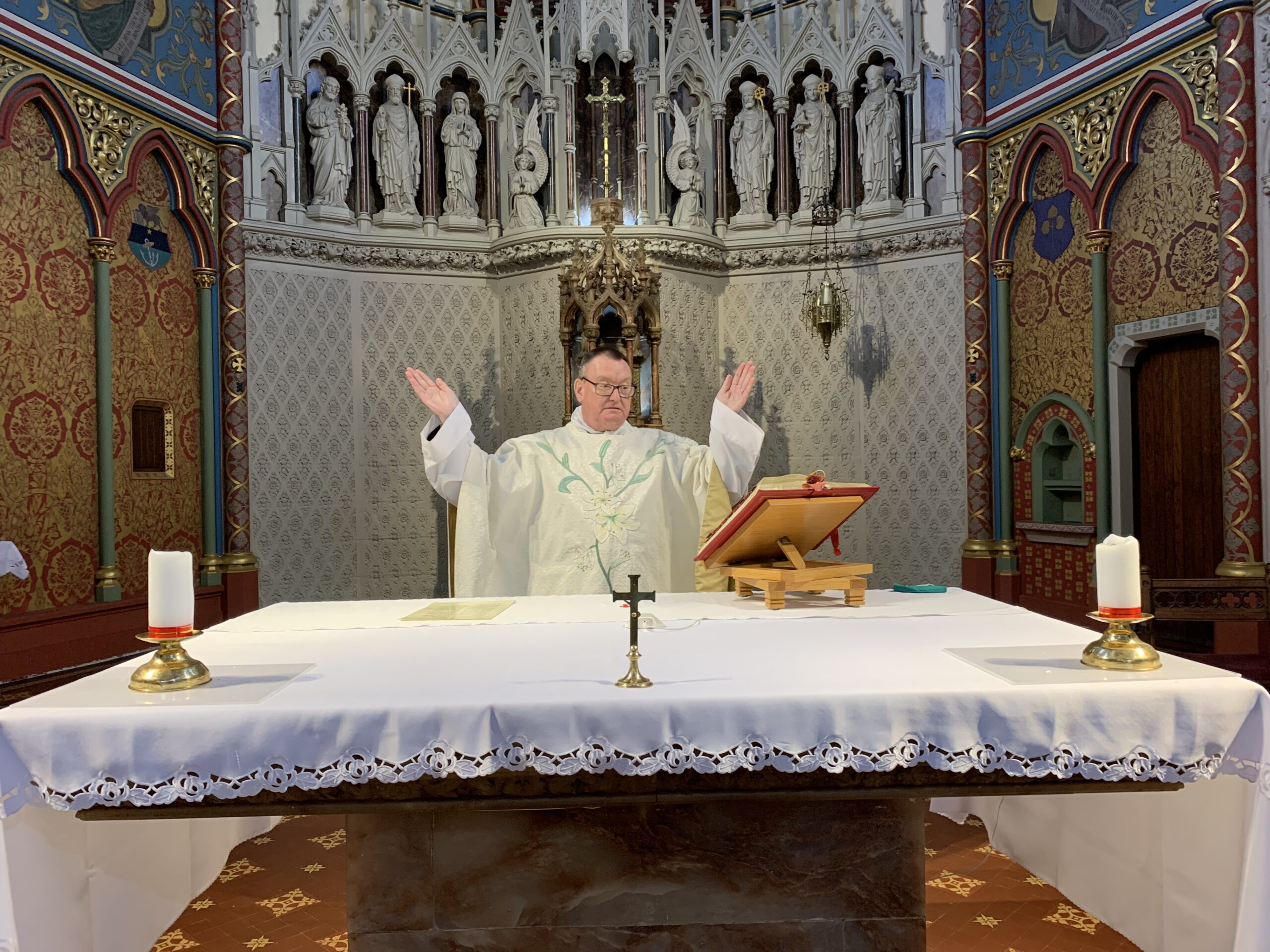 Upon a lofty throne, I saw a man seated,
whom a host of angels adore, singing in unison:
Behold him, the name of whose empire is eternal.

Attend to the pleas of your people with heavenly care,
O Lord, we pray,
that they may see what must be done
and gain strength to do what they have seen.
Through our Lord Jesus Christ, your Son,
who lives and reigns with you in the unity of the Holy Spirit,
God, for ever and ever.

All the elders of Israel gathered together and came to Samuel at Ramah. ‘Look,’ they said to him ‘you are old, and your sons do not follow your ways. So give us a king to rule over us, like the other nations.’ It displeased Samuel that they should say, ‘Let us have a king to rule us’, so he prayed to the Lord. But the Lord said to Samuel, ‘Obey the voice of the people in all that they say to you, for it is not you they have rejected; they have rejected me from ruling over them.’

All that the Lord had said Samuel repeated to the people who were asking him for a king. He said, ‘These will be the rights of the king who is to reign over you. He will take your sons and assign them to his chariotry and cavalry, and they will run in front of his chariot. He will use them as leaders of a thousand and leaders of fifty; he will make them plough his ploughland and harvest his harvest and make his weapons of war and the gear for his chariots. He will also take your daughters as perfumers, cooks and bakers. He will take the best of your fields, of your vineyards and olive groves and give them to his officials. He will tithe your crops and vineyards to provide for his eunuchs and his officials. He will take the best of your manservants and maidservants, of your cattle and your donkeys, and make them work for him. He will tithe your flocks, and you yourselves will become his slaves. When that day comes, you will cry out on account of the king you have chosen for yourselves, but on that day God will not answer you.’

The people refused to listen to the words of Samuel. They said, ‘No! We want a king, so that we in our turn can be like the other nations; our king shall rule us and be our leader and fight our battles.’ Samuel listened to all that the people had to say and repeated it in the ears of the Lord. The Lord then said to Samuel, ‘Obey their voice and give them a king.’

Happy the people who acclaim such a king,
who walk, O Lord, in the light of your face,
who find their joy every day in your name,
who make your justice the source of their bliss.

Alleluia, Alleluia!
May the Father of our Lord Jesus Christ
enlighten the eyes of our mind,
so that we can see what hope his call holds for us.
Alleluia!

Alleluia, Alleluia!
A great prophet has appeared among us;
God has visited his people.
Alleluia!

Gospel:
Mark 2:1-12
The Son of Man has authority on earth to forgive sins

When Jesus returned to Capernaum, word went round that he was back; and so many people collected  that there was no room left, even in front of the door. He was preaching the word to them when some people came bringing him a paralytic carried by four men, but as the crowd made it impossible to get the man to him, they stripped the roof over the place where Jesus was; and when they had made an opening, they lowered the stretcher on which the paralytic lay. Seeing their faith, Jesus said to the paralytic, ‘My child, your sins are forgiven.’

Now some scribes were sitting there, and they thought to themselves, ‘How can this man talk like that? He is blaspheming. Who can forgive sins but God?’ Jesus, inwardly aware that this was what they were thinking, said to them, ‘Why do you have these thoughts in your hearts? Which of these is easier: to say to the paralytic, “Your sins are forgiven” or to say, “Get up, pick up your stretcher and walk”? But to prove to you that the Son of Man has authority on earth to forgive sins,’ – he turned to the paralytic – ‘I order you: get up, pick up your stretcher, and go off home.’ And the man got up, picked up his stretcher at once and walked out in front of everyone, so that they were all astounded and praised God saying, ‘We have never seen anything like this.’

May your people’s oblation, O Lord, find favour with you, we pray,
that it may restore them to holiness
and obtain what they devoutly entreat.
Through Christ our Lord.

With you, O Lord, is the fountain of life,
and in your light we see light.

I have come that they may have life,
and have it more abundantly, says the Lord.

Humbly we ask you, almighty God,
be graciously pleased to grant
that those you renew with your Sacraments
may also serve with lives pleasing to you.
Through Christ our Lord.