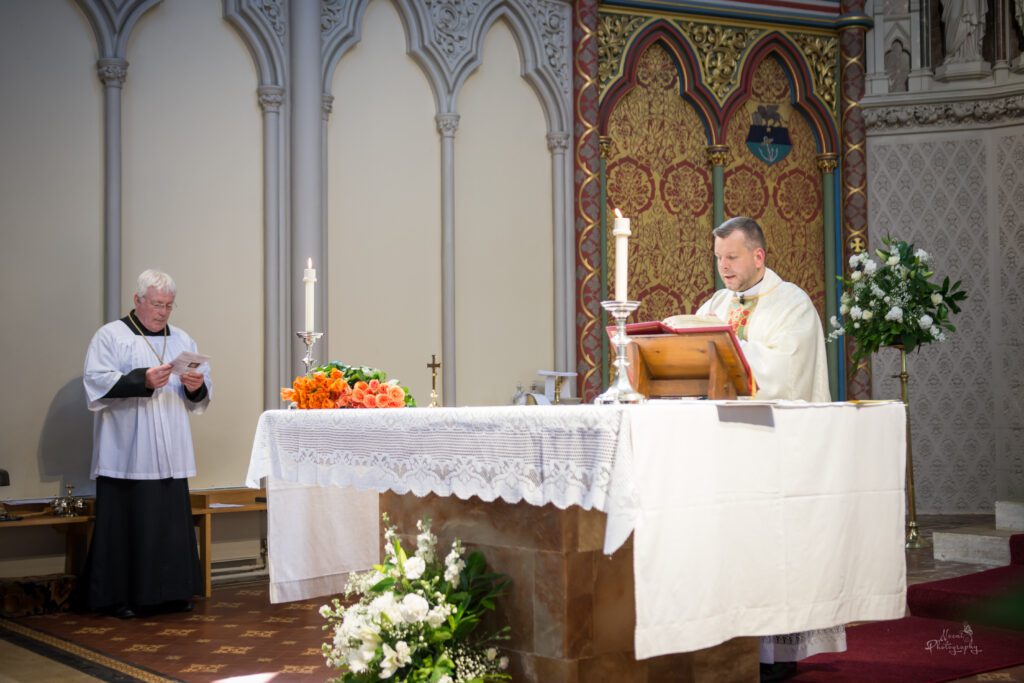 In a resplendent cloud the Holy Spirit appeared. The Father’s voice was heard: This is my beloved Son, with whom I am well pleased. Listen to him.

O God, who in the glorious Transfiguration of your Only Begotten Son confirmed the mysteries of faith by the witness of the Fathers and wonderfully prefigured our full adoption to sonship, grant, we pray, to your servants, that, listening to the voice of your beloved Son, we may merit to become coheirs with him. Who lives and reigns with you in the unity of the Holy Spirit, one God, for ever and ever.

His robe was white as snow

As I watched: Thrones were set in place and one of great age took his seat. His robe was white as snow, the hair of his head as pure as wool. His throne was a blaze of flames, its wheels were a burning fire. A stream of fire poured out, issuing from his presence. A thousand thousand waited on him, ten thousand times ten thousand stood before him. A court was held and the books were opened. I gazed into the visions of the night. And I saw, coming on the clouds of heaven, one like a son of man. He came to the one of great age and was led into his presence. On him was conferred sovereignty, glory and kingship, and men of all peoples, nations and languages became his servants. His sovereignty is an eternal sovereignty which shall never pass away, nor will his empire ever be destroyed.

The Lord is king, let earth rejoice,
let all the coastlands be glad.
Cloud and darkness are his raiment;
his throne, justice and right.

The mountains melt like wax
before the Lord of all the earth.
The skies proclaim his justice;
all peoples see his glory.

For you indeed are the Lord
most high above all the earth,
exalted far above all spirits.

When a Feast of the Lord falls on a weekday, there is no reading after the Psalm and before the gospel.

Alleluia, alleluia!
This is my Son, the Beloved: he enjoys my favour. Listen to him.
Alleluia!

His face shone line the sun

Jesus took with him Peter and James and his brother John and led them up a high mountain where they could be alone. There in their presence he was transfigured: his face shone like the sun and his clothes became as white as the light. Suddenly Moses and Elijah appeared to them; they were talking with him. Then Peter spoke to Jesus. ‘Lord,’ he said ‘it is wonderful for us to be here; if you wish, I will make three tents here, one for you, one for Moses and one for Elijah.’ He was still speaking when suddenly a bright cloud covered them with shadow, and from the cloud there came a voice which said, ‘This is my Son, the Beloved; he enjoys my favour. Listen to him.’ When they heard this the disciples fell on their faces overcome with fear. But Jesus came up and touched them. ‘Stand up,’ he said ‘do not be afraid.’ And when they raised their eyes they saw no one but only Jesus. As they came down from the mountain Jesus gave them this order, ‘Tell no one about the vision until the Son of Man has risen from the dead.’

Sanctify, O Lord, we pray, these offerings here made to celebrate the glorious Transfiguration of your Only Begotten Son, and by his radiant splendour cleanse us from the stains of sin. Through Christ our Lord.

When Christ appears, we shall be like him, for we shall see him as he is.

May the heavenly nourishment we have received, O Lord, we pray, transform us into the likeness of your Son, whose radiant splendour you willed to make manifest in his glorious Transfiguration. Who lives and reigns for ever and ever.