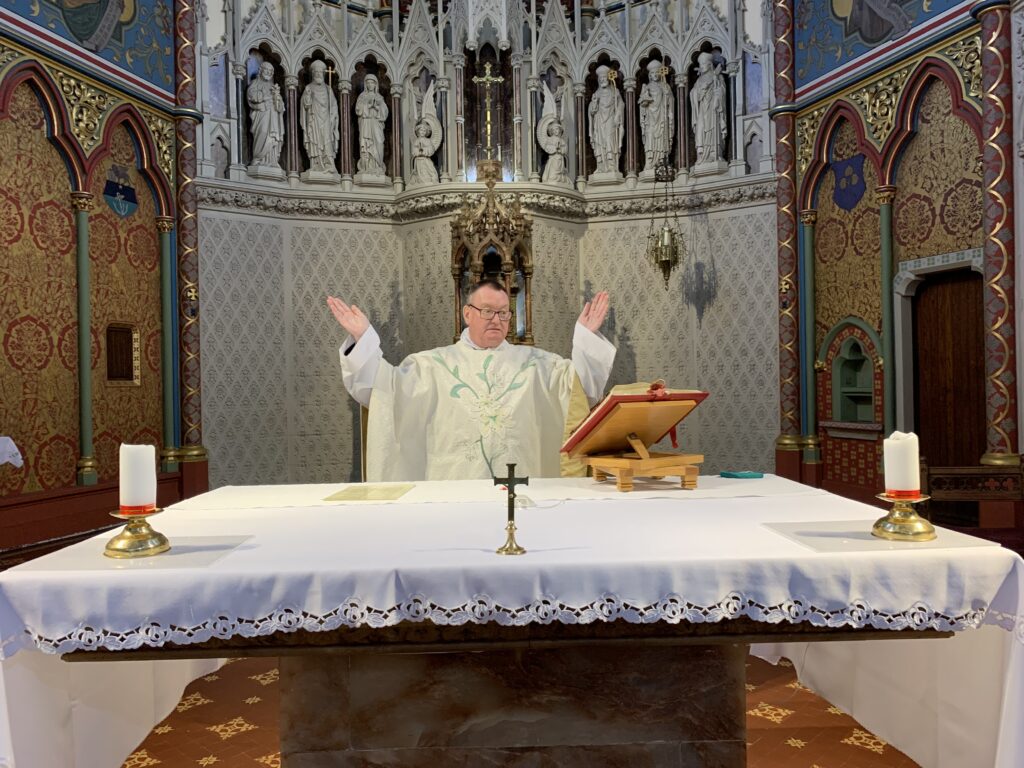 Friday 3 June 2022 Saints Charles Lwanga and his Companions, Martyrs  on Friday of the 7th week of Eastertide Liturgical Colour: Red.

As gold in the furnace, the Lord put his chosen to the test;
as sacrificial offerings, he took them to himself;
and in due time they will be honoured,
and grace and peace will be with the elect of God, alleluia.

O God, who have made the blood of Martyrs
the seed of Christians,
mercifully grant that the field which is your Church,
watered by the blood
shed by Saints Charles Lwanga and his companions,
may be fertile and always yield you an abundant harvest.
Through our Lord Jesus Christ, your Son,
who lives and reigns with you in the unity of the Holy Spirit,
God, for ever and ever.

Readings for the feria (Friday)

There is a choice today between the readings for the ferial day (Friday) and those for the memorial. The ferial readings are recommended unless pastoral reasons suggest otherwise.

First Reading:
Acts 25:13-21
‘I ordered Paul to be remanded until I could send him to Caesar’

King Agrippa and Bernice arrived in Caesarea and paid their respects to Festus. Their visit lasted several days, and Festus put Paul’s case before the king. ‘There is a man here’ he said ‘whom Felix left behind in custody, and while I was in Jerusalem the chief priests and elders of the Jews laid information against him, demanding his condemnation. But I told them that Romans are not in the habit of surrendering any man, until the accused confronts his accusers and is given an opportunity to defend himself against the charge.

So they came here with me, and I wasted no time but took my seat on the tribunal the very next day and had the man brought in. When confronted with him, his accusers did not charge him with any of the crimes I had expected; but they had some argument or other with him about their own religion and about a dead man called Jesus whom Paul alleged to be alive. Not feeling qualified to deal with questions of this sort, I asked him if he would be willing to go to Jerusalem to be tried there on this issue. But Paul put in an appeal for his case to be reserved for the judgement of the august emperor, so I ordered him to be remanded until I could send him to Caesar.’

For as the heavens are high above the earth
so strong is his love for those who fear him.
As far as the east is from the west
so far does he remove our sins.

The Lord has set his sway in heaven
and his kingdom is ruling over all.
Give thanks to the Lord, all his angels,
mighty in power, fulfilling his word.

Alleluia, Alleluia!
The Holy Spirit will teach you everything
and remind you of all I have said to you.
Alleluia!

‘I tell you most solemnly, when you were young you put on your own belt and walked where you liked; but when you grow old you will stretch out your hands, and somebody else will put a belt round you and take you where you would rather not go.’

In these words he indicated the kind of death by which Peter would give glory to God. After this he said, ‘Follow me.’

We offer you sacrifice, O Lord, humbly praying
that, as you granted the blessed Martyrs
grace to die rather than sin,
so you may bring us to minister at your altar
in dedication to you alone.
Through Christ our Lord.

How precious in the eyes of the Lord
is the death of his holy ones., alleluia.

We have received this divine Sacrament, O Lord,
as we celebrate the victory of your holy Martyrs;
may what helped them to endure torment, we pray,
make us, in the face of trials,
steadfast in faith and in charity.
Through Christ our Lord.