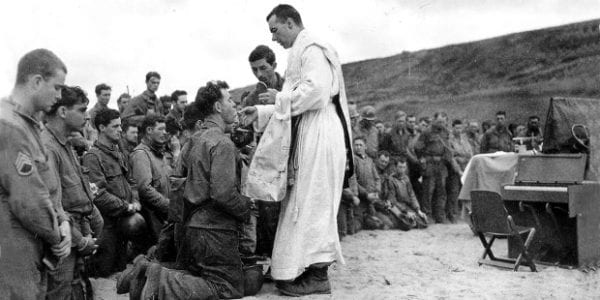 Let us remember three clergymen whose extraordinary courage should never be forgotten.

Tens of thousands of Allied forces stormed the beaches of Normandy. June 6, 1944 — D-Day was underway. That day 75 years ago launched the major turning point in World War II. As more than 156,000 soldiers took part in the Normandy landings, chaplains also landed or parachuted with them. To commemorate the anniversary, the Register remembers three clergymen whose extraordinary courage should never be forgotten.

Father Francis Sampson, the “Parachute Padre” who served in the 501st parachute regiment, was among the 15,500 soldiers who jumped behind enemy lines that fateful June 6. “Probably no chaplain, Catholic or otherwise, saw more of the horrors of the hedgerow campaign than Francis Sampson,” related Jesuit Father Donald Crosby in his book Battlefield Chaplains: Catholic Priests in World War II (University Press of Kansas, 1994).

Right away Father Sampson began tending to the wounded and dying, both spiritually and physically, but German SS troops captured him and marched him down the road to shoot him, recount both Father Crosby and Lawrence Grayson in an online article titled, “A Padre in Jump Boots.”

Father Sampson would say he was so nervous he kept praying the “grace before meals” instead of the Act of Contrition. Next, the Germans stood him against a wall and raised their guns to shoot him, when a German officer spotted his chaplain’s insignia. The officer fired over the troops’ heads to stop them. Father Sampson identified himself to the officer as a Catholic priest. In response, the officer saluted, bowed slightly and showed him a Catholic medal pinned inside his uniform and insisted Father Sampson see pictures of his baby.

“The German officer, who had clearly saved his life, promised him that a German doctor would come by in a day or two and tend to the wounds of the American soldiers,” said Father Crosby.

In the meantime, Father Sampson not only saved the American soldiers, but gave his own blood to a wounded soldier and continued working with no rest. He was awarded the Distinguished Service Cross (DSC) for his heroism at Normandy.

After D-Day, Father Sampson would be recaptured by German troops during the Battle of the Bulge and, as a prisoner in a stalag until the end of the war, he remained committed to helping the sick and saying Mass. He went on to become the U.S. Army’s chief of chaplains from 1967 to 1971. The 1998 movie Saving Private Ryan was based on one of Father Sampson’s missions connected with D-Day.

“The Chaplain Corps, per capita, were the most highly decorated of all the branches of the army,” observed Lyle Dorsett, author of Serving God and Country: United States Military Chaplains in World War II (Berkley Books, 2012), upon D-Day’s 70th anniversary five years ago for the Register. “It means you’ve got guys on the front, giving and risking their lives so that others can be ministered to.”

Father Joseph Lacy was among the 34,250 U.S. soldiers who landed on Omaha Beach that June 6. Only a week earlier he had joined the 5th Ranger Battalion.

That the chaplain did. He was on the first landing craft on the Rangers’ section of Omaha Beach.

He was the last man out of the landing craft before a shell hit it. He started pulling men out of the water onto the beach, helping the wounded and administering last rites.

The citation from the DSC he was awarded with for his actions describes what the heroic priest did that day. It describes 1st Lt. Lacy’s “extraordinary heroism in action on 6 June 1944,” when the chaplain “landed on the beach with one of the leading assault units. Numerous casualties had been inflicted by the heavy rifle, mortar, artillery and rocket fire of the enemy. With complete disregard for his own safety, he moved about the beach, continually exposed to enemy fire, and assisted wounded men from the water’s edge to the comparative safety of a nearby seawall, and at the same time inspired the men to a similar disregard for the enemy fire. Chaplain Lacy’s heroic and dauntless action is in keeping with the highest traditions of the service.”

Nearly half the Rangers who landed with Father Lacy were killed or wounded, but they were the first to break enemy lines. After D-Day, their chaplain continued with them into France, and in the 1960s, as then-Msgr. Lacy, he became chancellor of the Archdiocese of Hartford, Connecticut, under the leadership of Archbishop Henry O’Brien. 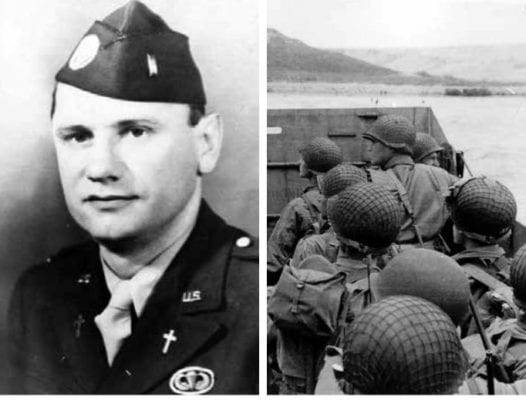 Among the massive carnage of D-Day, the only U.S. military chaplain killed in action was a Catholic priest, Franciscan Father Ignatius Maternowski. The 32-year-old friar parachuted in with the 82nd Airborne Division.

Dorsett recalled descriptions of the priest that he heard from those who served with him. “One man said he was a tough energetic Pole, and he was extremely liked by men of his regiment,” he previously told the Register. “He was a man’s man. Chaplains didn’t have to get into the front lines where there was combat, but these guys refused to stay back. They would go up to the front.”

He “didn’t find it amusing when men were telling filthy jokes, speaking crudely, or taking the Lord’s name in vain. More than one time he would say ‘Put on boxing gloves’ to anyone who made remarks about the Church or confession.”

Father Maternowski, a U.S. Army captain, was a paratrooper with the 82nd Airborne’s 508th Parachute Infantry Regiment. The regiment’s website recalls that the paratroopers landed near the small village of Picauville, where the only store, a grocery, was turned into a makeshift first-aid station for the wounded paratroopers.

Seeing it quickly overcrowded, with more injured on the way in, Father Maternowski made a risky move to meet with the German chief medic in charge of their wounded to negotiate combining all of the wounded in a large space. With his religious chaplain’s insignia on his jacket and wearing a Red Cross armband, he removed his helmet and walked fearlessly to the German lines.

Surprisingly, he returned to the makeshift aid station with the same German medic to show him the conditions. He must have later returned to the German lines with the German officer because when he was walking back to the American lines alone, a Nazi sniper shot him in the back from one of the nearby houses.

He collapsed onto the road, where his body lay three days in the settlement of Gueutteville, part of Picauville. The Germans would not let anyone recover him. Once soldiers of the 90th Infantry Division showed up, they were able to recover his body. There is a memorial erected in Gueutteville giving an account of the chaplain’s courageous deeds. In 1948 Father Maternowski’s remains were returned to the United States and buried in the Franciscan Friars’ cemetery section in South Hadley, Massachusetts. His gravestone bears the words: “No Greater Love.”

Archbishop Timothy Broglio of the Archdiocese for the Military Services, USA, cited Father Maternowski as a role model for military chaplains everywhere during the last major D-Day remembrance, saying, “Father Maternowski’s heroic sacrifice is an outstanding example of Christian love in practice, even in the face of great evil and adversity.”

is here with you. Good evening Fr Marcin, ciao Bilbo and Hello Everyone. Pax et Bonum.

But every time I re-read the Bible I find the Book of Numbers rather heavy for my little ignorant brain.

I have a granddaughter she is called Anya, now I now the meaning, thank you

I still clapped. Everyone is still working so hard and giving so much

Good evening everyone and good Father and bilbo ..Ashley & Sylwia

Good evening Father and Bilbo and all my friends

Yes i saw that ...bless them our kids at the school are finding the social distancing hard and don’t understand it

It’s going to be wet at the weekend that will keep them at home.

Goodnight Father, hope you can do something to help you with your cough

🙊 here I am just hoping I can hug my mother sometime soon.☹️

I think because people going back to work. Our street is going to go out and pray next week

If my children were younger I'd now be home schooling them

Good night father and the same to you all

Good evening all. My internet is on and off all the time since mass this morning xx

I started reading the Bible from front through, is this the best way?

It was last 9May Fr Marcin jut thank you xx

The creator of the clapping decided it should end.

The person who started the clapping, thought it was becoming political .

Thank you Father.It feels so much better praying together with others. It helps with the loneliness. God Bless you

Thank you father and all who joined. 🙏🏻

Jesus I Trust In You 🙏

Good afternoon everyone from Brian & Linda