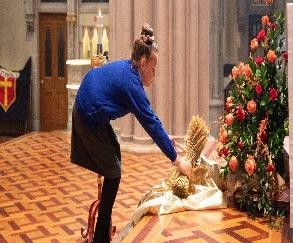 On Friday 7th of June, six Mini Vinnies went to St John’s Cathedral for the Annual School Mass with Mr Olive and Mrs Mitchell. We had lots of fun and even met Bishop Philip.We sang lots of hymns and listened to different readings. All the schools that were there had banners, including us with our school name on it. Milly brought an offertory up to the altar.We received a gift from Bishop Philip – a framed picture of St Oscar Romero, quoting ‘The ones who have a voice must speak for those who are voiceless’. This reminds us to always stand up for what we believe in and to help those around us to do the same. It was a very inspiring experience for us all.

By Milly and Kirsty.

Last Friday, I celebrated the annual Mass for Schools in the Cathedral. We have 75 schools across the Diocese and the Mass was attended by representative teachers and students from many of them, near and far. The theme this year was based around St. Oscar Romero and at the end of Mass, I gave out awards to those schools that had excelled in the Oscar Romero Award programme. The Oscar Romero Award recognises a school’s commitment to Catholic Social Teaching. The award itself is a way of supporting schools in realising and living the unique calling of a Catholic school to become an evangelising centre by empowering young people and staff to become true agents of the change they want to see in the world by putting their faith into action. You can read more about it here.

I am very impressed and inspired by St. Oscar and in the Mass I dedicated the homily to this great man. This is what I said:

I want to tell you a story. It’s about a boy from a poor country in Latin America called El Salvador. His name was Oscar. As he grew up, he wondered what to do when he left school. His father taught him woodwork but Oscar also really liked his parish priest and he thought God wanted him to become a priest. So he went to see the Bishop, who sent him to study in Rome and it was there, when he was 24, he was ordained a priest. Now this was 1942, right in the middle of WW2, and it took him, and another new priest, over a year to get back home. When the ship landed in Cuba, the police arrested them because they’d come from Italy, an enemy country. They were put in prison for many months, but eventually they escaped.

The Bishop first made Fr. Oscar parish priest of a tiny village, then later a big town. He seemed to rise through the ranks, because soon he became the rector of the seminary and editor of the diocesan newspaper. There was a lot of trouble and unrest in El Salvador at that time but Oscar always avoided talking politics. One day the Pope wrote to him, appointing him Bishop of Santiago. When he got there, he was shocked to see children dying in the streets because no one could afford even basic medicines like aspirin. So he began to use money from the Diocese and even his own money, to help. He knew that charity was not enough: a major change was needed. The Pope then appointed him Archbishop of San Salvador, the capital city. Things were now desperate with government troops on the streets, with left-wing and right-wing guerrillas killing each other and silencing anyone working for peace and justice. Lots of politicians disappeared; teachers and priests were kidnapped, including one of his best friends, Fr. Grande. This was 1980, so he bought some radio equipment and started broadcasting sermons calling for peace, telling the truth about what was going on, and begging everyone to stop the terrorism and violence. It was a really dangerous thing to do, because he could easily have been eliminated. He also spoke against the terrible poverty and injustice that so many people suffered in the slums, while a few very rich people with everything couldn’t care less about the poor and paid very low wages. On the radio that year, he appealed directly to the police: I beg you, I implore you, I order you … in the name of God, stop the repression! The next day, he was in the middle of saying Mass, the doors in his chapel open, when there was a sudden screech of brakes. An unknown assassin fired a bullet from a car and shot him dead. They’d just heard Jesus’s words in the Gospel: Greater love has no one than this: to lay down one’s life for one’s friends. His murder shocked the world: I can remember it on the News at the time. Over a quarter of a million people attended his funeral.

If you want a saint and a hero for 21C, it’s this man here on your books: St. Oscar Romero! Google him, and you’ll find lots more about him, pictures, videos and podcasts: a very holy man, a man of courage, a man of simplicity. Utterly orthodox and utterly radical, he loved God and he loved the poor, even to giving his life, an example for us all. So what about you and me? Jesus asks us the same question He asked Peter in the Gospel: Simon, son of John, do you love me? Let’s answer: Yes, Lord, you know I love you whatever the cost. In this Mass, inspired by St. Oscar Romero, who like Jesus laid down his life for his friends, let’s pray that we too will always be close to Jesus, that we too will always care for the poor and needy, that we too will always be a Voice for the Voiceless – in our homes, in our schools and in our land.