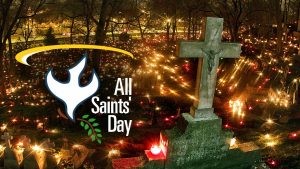 Holy Day of Obligation: A reminder that All Saints Day (1st November) is a holy day of obligation where (just like a Sunday) all Catholics are obliged to attend Mass.

Mass times will be: On Friday 1st November ALL SAINTS day:

Be Holy - Word on Fire

CHRISTIAN MORNING MEDITATION:“You have heard that it was said, An eye for an eye and a tooth for a tooth. But I say to you, offer no resistance to one who is evil. When someone strikes you on your right cheek, turn the other one as well.” Matthew 5:38-39At the time of the Old Testament, the introduction of the concept of “an eye for an eye” was seen as great progress in regard to civil peace. This is because it was very common for vengeance to take the form of going beyond the crime committed. For example, if one family stole an animal, the victim’s family may have retaliated by killing the whole flock of the family who did the stealing. This only led to constant fighting and unrest among tribes and communities.Therefore, when this law was introduced within the law of Israel, it brought a certain peace. Justice could be served, but once equal justice was dealt, the vengeance had to be considered over.But Jesus comes along and takes this practice to a whole new level. He takes the idea of “strict justice” and transforms it into mercy and forgiveness. By stating, “When someone strikes you on your right cheek, turn the other one as well,” Jesus is introducing the new concept of forgiveness rather than equal justice. Does He literally mean that we should turn and offer the other cheek? Well, that is what He said so it makes sense to accept this teaching on face value. But we’d miss the point if we got caught up in the question of this one action. What Jesus is truly trying to get across is that mercy and forgiveness must become the new law that governs our lives. So what if someone steals from you? Ought you demand that they pay you back? Though you may have a legal right to do so, it may be even better to confront that person, in love, and let them know they are forgiven. Yes, that may be hard, but it is the mercy and forgiveness of which Jesus is speaking.Mercy and forgiveness can, at times, appear to be contrary to justice and common sense. But it’s not. It’s a higher law calling us to a much greater level of true justice. This law can only be understood when we see the sacredness and dignity of every person, including the sinner and the criminal. We should not allow them to continue their criminal behavior, but we do administer the highest justice of God when we forgive and offer mercy.Reflect, today, upon this very challenging thought. God’s justice is, first and foremost, accomplished by His mercy. If you can understand that and live it, you will see great things happen in your life and in the lives of those you forgive.Lord, help me to forgive. Help me to offer mercy as a remedy for the injustice I face in life. May I heed Your words and follow the perfect example You set while on the Cross when You prayed, “Father, forgive them, they know not what they do.” Help me, Lord, to imitate Your love and forgiveness. Jesus, I trust in You.stswithuns.org.uk/newsletter-NL_23022020 ... See MoreSee Less

Patron Saint of the Internet? Carlo Acutis to Be Beatified