War in Ukraine – Message from The Fatima Centre

The current crisis in Ukraine shows us all the true urgency of fulfilling Our Lady’s requests at Fatima. God always permits good to come from evil. Surely this war, especially in that area of the world specifically named by Our Lady at Fatima, will open people’s minds and hearts to the truth which this Fatima Apostolate has consistently championed.

The Communion of Reparation on the First Saturdays must be promoted and the Consecration of Russia must be performed. Only in this manner will there be a worldwide devotion to the Immaculate Heart of Mary, the conversion of Russia, and a period of world peace. On Ash Wednesday, Ukraine’s episcopal conference formally and publicly asked the Pope to consecrate Russia to the Immaculate Heart of Mary. We call upon all Catholics to pray and offer penance so that many more episcopal conferences, bishops, abbots, priests and religious will make similar requests of the Holy Office,

Promoting obedience to Our Lady’s Message is the primary mission of The Fatima Center. As this crisis unfolds, it affords a singular opportunity for us to further this mission. Please join our efforts through your prayers and by spreading the Message of Fatima.This is a critical moment in history. Mankind is fast approaching one hundred years since the request for this Consecration was first asked for by Our Lady under God’s command in 1929. We stand at the 11th hour. Let us all earnestly pray for the Consecration of Russia at this critical moment in history.

Note: St Swithun Parishioners are cordially invited to join the small group who after weekdays 9 am mass say the rosary for world peace and particularly on the first Saturday of each month. 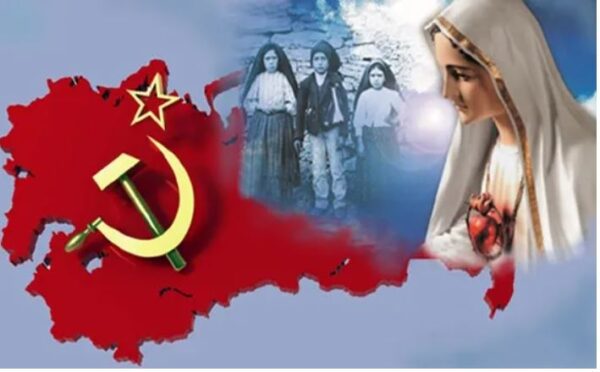 After 1917 and that is after receiving the secret from Our Lady, Sister Lucia had other revelations from heaven. In fact, in the second secret, Our Lady informs Sister Lucia that she would come again to talk to her about the consecration of Russia.

This is what happened on June 13, 1929. In her memoirs of Sister Lucy, she reveals the details:

“Then Our Lady said to me: «The moment has come when God asks that the Holy Father, in union with all the Bishops of the World, consecrate Russia to My Immaculate Heart, promising to save it by this means. There are many souls whom the justice of God condemns for the sins committed against Me, whom I come to ask for reparation: sacrifice yourself for this intention and pray ». I informed the confessor everything regarding the matter, who ordered me to write down what Our Lady asks that should be done. “

A Russia Threatens War, It’s Time to Turn Again to Our Lady of Fatima an article by Maryella Hierholzer

“Our Lady of Fatima, pray for us!” As a child, I recall learning of the Blessed Mother’s promises at Fatima for the conversion of Russia. I can still see the Time magazine with the picture of Soviet dissident Aleksandr Solzhenitsyn on its front cover, and I recall fondly how much many people of good will admired him and all other voices who had the courage to speak up against the Soviet regime.

When the Berlin Wall fell, I cheered together with many other people that prayers to Our Lady had accomplished what had seemed like the impossible. To this day, so many of us remain grateful for the teamwork of President Ronald Reagan and Pope St. John Paul II in promoting greater freedom throughout the former Soviet Union.

And yet today there is a Russian military buildup on the Ukrainian border. What happened to Our Lady’s promise? What is the true makeup of Russia today?

And who are we as a nation? Do we really love the Lord our God with all our heart, mind and soul, and our neighbors as ourselves?

When I also read of increasing violence within the U.S., I can’t help but think that we are more often looking inward instead of outward to the effects of our actions on other people and are less aware of the dignity of the human person, whether in Ukraine or in our own backyard. A prayer practice repeatedly recommended by priests on my retreats has been to beg God for the grace to forget about oneself.

It’s hard to put our own cares in the background, and it wouldn’t hurt to pray the Litany of Humility, in the spirit of the Blessed Mother. Praying this litany also reminds me that praying is actually doing something to promote world peace and to help other people. I don’t always have to be the one implementing a solution to a problem. Perhaps Our Blessed Lord just wants me to be one of his helpers in the background.

Like President Reagan, I want to forget self and ignore abundant criticism. Like Pope St. John Paul II, I want to forgive and see the hurt in the lives of my opponents. But most importantly, I want to be that humble child of Mary’s, willing to trust God that I can give my life to him to help other people.

There are big ways to help other people, but small gestures can bring people peace. One small way members of my hometown showed their appreciation for other community members was to maintain a home’s exterior at the expense of a spruced-up home interior. The inside of a home could be incredibly dated, but for the sake of the neighborhood, the outside was landscaped and kept tidy no matter what. A presentable yard was a sign of consideration for what your neighbors would have to view. And having everything pruned and trimmed was a way of saying that you and your family belonged to a community. It was a simple act of selflessness right at home, but done for many people.

In all matters, is not this life of self-sacrifice what the Blessed Mother wants from all of us? Perhaps contemplating the sacrifices of the three children at Fatima is a good place to start. And there is the prayer that the Angel of Peace taught to the children in Portugal, which could also be a good way to start or end a day committed to God:

My God, I believe, I hope, I adore and I love thee. I ask pardon for those who do not believe, do not adore, do not hope and do not love thee.

Heeding Our Lady’s prayer and worship requests for each First Saturday is a routine I’ve decided to try and maintain. I have to ask myself, is it too hard to find the time to do what Our Lady of Fatima asked us to do on the first Saturday of five successive months by attending Mass to receive Holy Communion, going to confession, praying the Rosary and meditating on its mysteries for 15 minutes? I want to make a habit of this small act of reparation on every First Saturday. And in doing so, I’ve found meditating on the mysteries of the Rosary without actually praying it to be so powerful, that the practice is strengthening on any difficult day.

Keeping the peace requires a lot of work. It’s a task between nations but it begins in the heart of each person. And Mary is that mother just waiting to help us make it happen.

Our Lady, Queen of Peace, pray for us!