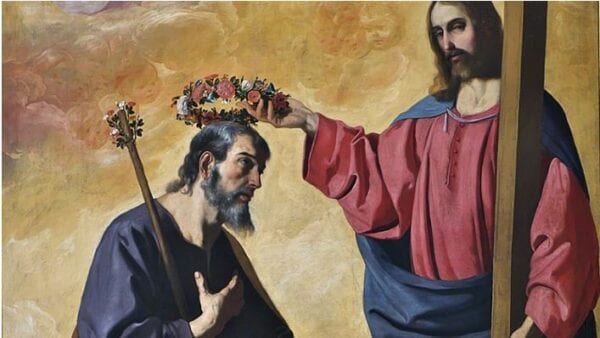 The month of March is dedicated to St. Joseph. We don’t know much about him except what is mentioned in the Gospels. Joseph was the husband of the Blessed Virgin Mary and the foster-father of Jesus. Holy Scripture proclaims him as a “just man,” and the Church has turned to Joseph for his patronage and protection. Pope Leo XIII in his encyclical Quamquam Pluries (On the Devotion to St. Joseph) in 1889 explains why we place so much trust in this saint:

“Thus in giving Joseph the Blessed Virgin as spouse, God appointed him to be not only her life’s companion, the witness of her maidenhood, the protector of her honour, but also, by virtue of the conjugal tie, a participator in her sublime dignity. And Joseph shines among all mankind by the most august dignity, since by divine will, he was the guardian of the Son of God and reputed as His father among men. Hence it came about that the Word of God was humbly subject to Joseph, that He obeyed him, and that He rendered to him all those offices that children are bound to render to their parents. From this two-fold dignity flowed the obligation which nature lays upon the head of families, so that Joseph became the guardian, the administrator, and the legal defender of the divine house whose chief he was. And during the whole course of his life he fulfilled those charges and those duties. …It is, then, natural and worthy that as the Blessed Joseph ministered to all the needs of the family at Nazareth and girt it about with his protection, he should now cover with the cloak of his heavenly patronage and defend the Church of Jesus Christ.”

One hundred years later John Paul II echoes his predecessor in his 1989 Apostolic Exhortation Redemptoris Custos (Guardian of the Redeemer), hoping “that all may grow in devotion to the Patron of the Universal Church and in love for the Saviour whom he served in such an exemplary manner … In this way the whole Christian people not only will turn to St. Joseph with greater fervour and invoke his patronage with trust, but also will always keep before their eyes his humble, mature way of serving and of “taking part” in the plan of salvation.” St. Joseph is invoked as patron for many causes. He is the patron of the Universal Church. He is the patron of the dying because Jesus and Mary were at his death-bed. He is also the patron of fathers, of carpenters, and of social justice. Many religious orders and communities are placed under his patronage. 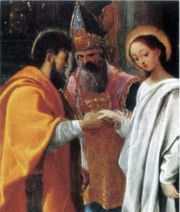 The month of March by custom is devoted to St. Joseph and we look forward to his great feast day on 19th March. The Holy Father Pope Francis has dedicated this year to him in commemoration of the 150th anniversary of the saint’s proclamation as the Patron of the Universal Church by Pope Pius IX on 8th December, 1870. We thus have every reason to invoke him in our prayers. One traditional prayer that you may or may not be familiar with is the Litany of St. Joseph. It was approved for public use by Pope St. Pius X in 1909, although its origins go back further. It contains twenty-five invocations expressing the virtues and dignity of St. Joseph.

V. God made him the lord of His household,
R. And prince over all His possessions.

Let us Pray
O God, who in your inexpressible providence were pleased to choose Saint Joseph as spouse of the most holy Mother of your Son, grant, we pray, that we who revere him as our protector on earth, may be worthy of his heavenly intercession. Through our Lord Jesus Christ, your Son, who lives and reigns with you in the unity of the Holy Spirit, God, for ever and ever. Amen.